Dustin Poirier defeats Max Holloway via Submission at 3:23 of Round 1 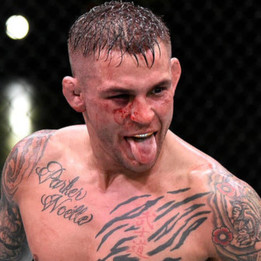 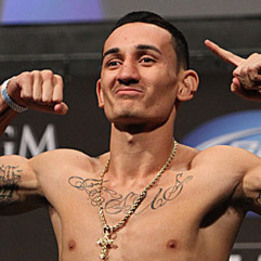 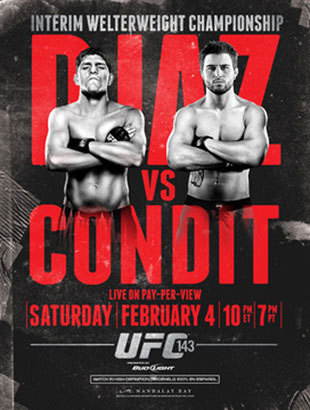 The sixth bout of UFC 143 featured Max Holloway taking on Dustin Poirier in the featherweight division.

Holloway looked comfortable standing early and backed Poirier down with some flashy attacks. Poirier decided to transition to takedown attempts, connecting on his second as he lifted up and slammed Holloway to the ground. Poirier immediately moved to full mount and prevented Holloway from pressing off the fence and rolling over. Poirier attacked for an armbar, transitioned quickly to a triangle choke, and with Holloway mounted stuck in a triangle, Poirier worked the armbar again badly hyper-extending the arm and forcing a desperate submission from Holloway.

The official end came at 3:23 for the submission victory for Poirier. Speaking to Joe Rogan in the post-fight interview, Poirier commented, "I'm happy, I came here to get a win and I finished the fight... I train hard and I don't cut corners, I'm here to be a champion... he's tough, he's a great kickboxer, a lot of people didn't know him but I trained hard for him and don't mess around in training."

It's probably better we just keep on rockin' in the free world."

.@KoreanZombieMMA Trust me you don't want this... I will expose you.

I want to go Zombie hunting!!

Just left the gym. The @GladiatorsLA fighters are ready for battle this weekend!!

If you ain't from Louisiana you don't know nothing about this http://t.co/VFpzlrG4

My awesome wife had this waiting for me when I got home!!! http://t.co/5jLp12CV

@shotgun_young haha thanks it's a Cinnabon! I can't wait to see you get your hand raised in your next fight!

My body hates me right now! After dieting for so long then eating like a mad man. I need tums http://t.co/e8KqLslM

Thanks everyone for the support and belief. Hard work and dedication pays off again! I'm living my dream. Really ...thank you

6 hours and 18 minutes
after

1 day and 22 minutes
before

Title shot? UFC 143's Dustin Poirier would be content with a gi and crawfish http://t.co/jUJu3Q9M

“@sims4582: Counting down the days till the "Diamond" @DustinPoirier shows the world how great he is.. AGAIN!! #myinspiration” thanks bro!

“@DANGER_Caged: @DustinPoirier got me a diamond shirt yesterday bro. It's fresh!! #caged” awesome thanks man!! where did you get it?

http://t.co/h2kXB8eZ via @UFC Really good article on the @ufc website!

“@elliotp9: @DustinPoirier Cant wait for the fight man! Do what the diamond does!” thanks bro I will!

@DaMarques_UFC word! it'll do that to you!!

Feeling great I'm in the best shape I've ever been in thanks to @Sunwarrior !! Almost fight week! Let's go!!!!

Every fight has a beautiful story behind it. It's so much more than just a fight. #realtalk #diamondthoughts #UFC143

“@sdcassel: @DustinPoirier Who you got this weekend, Sonnen or Bisping, Evans or Davis?” sonnen and Evans

I love your products!! Thanks for putting great supplement out there! @sunwarrior http://t.co/6kexxBTN