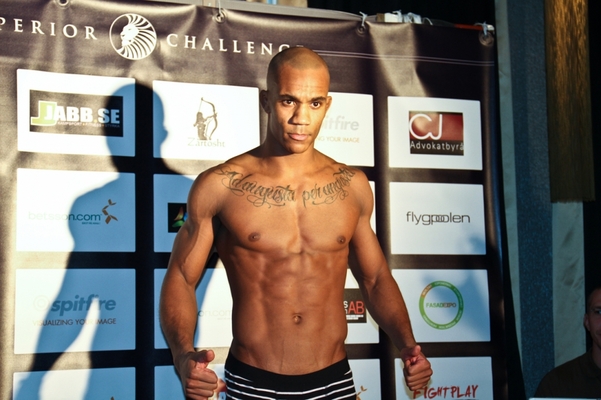 Nico Musoke is ineligible for regional rankings due to inactivity.
Fighters must have at least one completed MMA bout in the past two years to be ranked.

Nico Musoke is a Swedish middleweight fighter currently signed to the UFC. He has a purple belt in Brazillian Jui Jitsu and trains out of Stockholm, Sweden. He was the welterweight champion of On Top promotions in the UK. He has finished nine of his twelve wins with five submissions. He is currently on an eight fight unbeaten streak including a win over Allesio Sakara. He has won the "Submission of the Night" bonus one time.

Musoke began his professional career in 2007, but would only fight three times in his first three years. In 2010, he would begin fighting more consistently. He would experience his first loss to future UFC fighter, Danny "The Cheesecake Assasin" Mitchell, losing by submission. He would pick up another pair of wins before losing a decision to Cage Warriors welterweight champion, Cathal "The Punisher" Pendred. He would pick up another two wins for a Finnish promotion before he returned to On Top promotions where he would pick up the vacant welterweight title which he would defend one time.

Nico was signed to the UFC in 2013 and made his debut against veteran Alessio Sakara at UFC Fight Night 30: Machida vs. Munoz. Despite having a serious experience disadvantage and being the underdog going in, he was able to hold his own striking and eventually grabbed a lightening fast armbar to win his first UFC fight as well as pick up the "Submission of the Night" bonus. He took on Viscardi Andrade at UFC Fight Night 36: Machida vs. Mousasi in his opponents home country of Brazil and was able to pick up a unanimous decision victory.

Musoke would next face undefeated up-and-comer Kelvin Gastelum at UFC Fight Night 44: Swanson vs. Stephens. Gatelum weighed in at 172.5, thus forfeiting a portion of his purse. Musoke was defeated via Unanimous Decision.

Musoke bounced back in his homeland when he face Alexander Yakovlev  at UFC Fight Night 53: Nelson vs. Story. Musoke defeated Yakovlev via Unanimous Decision.

Musoke would again find himself fighting in his home country, when we met Albert Tumenov, at UFC on FOX 14: Gustafsson vs. Johnson. It was an exciting fight, but Tumenov was better and the judges gave him the victory by UD.