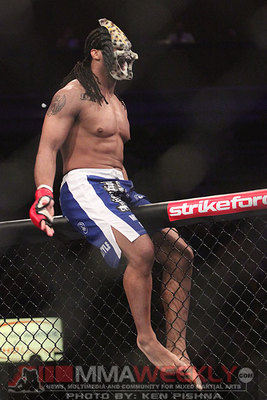 Brian Rogers is ineligible for regional rankings due to inactivity.
Fighters must have at least one completed MMA bout in the past two years to be ranked.

Currently contracted to Bellator's middleweight division, Ohio native Brian Rogers is one of the most exciting fighters you're going to find. All of his wins end inside the distance, and eight of his nine victories are by knockout. Only two (both losses) of his 13 fights has gone to a decision. After nine first round victories (one by submission), his fourteenth fight with Dominique Steele was his first victory by decision.

'The Predator' began his career fighting mainly fighting in his home state of Ohio. After starting his pro career with a 1-2 record, Rogers would go on a five fight win streak, where he knocked out each of these five opponents in the first round. He would then fight on the under card of 'Strikeforce: Feijao vs. Henderson' against Ian Rammel, where he once again won by first round TKO. He would then be invited to take part in Bellator's middleweight tournament, winning the first round against Victor O' Donnell, then suffering a TKO defeat to eventual tournament winner Alexander Shlemenko. The following season, he delivered one of the most memorable knockouts in the organization's history, when he brutally knocked out BJJ black belt Vitor Vianna with a flying knee. He would face off in a fight against Swede Andreas Spang at Bellator 66, where he once again fought in front of a hometown crowd in Cleveland, Ohio. After dominating and controlling the action for a round and a half, Rogers was caught by a punch from Spang, knocking him out cold. It could be argued that this memorable back in forth war was one of the best fights in Bellator's sixth season.

He is scheduled to face Dan "Cosmo"  Cramer in the start of his third Bellator tournament.