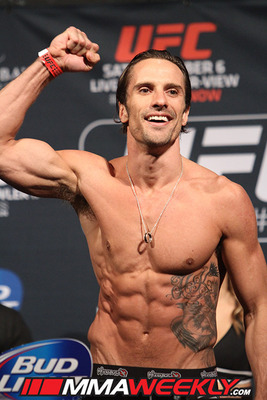 Josh Samman is ineligible for regional rankings due to inactivity.
Fighters must have at least one completed MMA bout in the past two years to be ranked.

Josh Samman was the 2nd fighter selected to Team Jones on the 17th season of The Ultimate Fighter. Samman made it into the house with his 1st round finish of of Lou Bercier.

In the 5th episode of the season Chael Sonnen selected Josh to fight Team Sonnen's 4th round pick Tor Troeng. He would finish Tor in the first round by TKO. He would then face off against the experienced ground game of Jimmy Quinlan. Samman would once again come out on top finishing Quinlan by submission due to strikes. In the Semi-Final fight against Kelvin Gastelum. Even though Samman was considered the heavy favourite by both coaches, he was quickly taken down by Gastelum and submitted in Round 1. Gastelum would eventually  go on to win TUF.

At The Ultimate Fighter 17: Team Jones vs Team Sonnen Finale, Samman faced Kevin Casey, a member on Team Sonnen who lost his Elimination Round during TUF 17 season. Samman defeated Casey in Round 2 at 2:17, via TKO.

Samman was to replace Nick Ring against his former The Ultimate Fighter 17 rival Uriah Hall on August 17, 2013 at UFC Fight Night 26. However, on July 17, he was taken out of the bout after an undisclosed injury. Samman was expected to face Caio Magalhaês on April 19, 2014 at UFC on Fox 11 but was forced to withdraw after tearing his left hamstring.

Samman faced Eddie Gordon on December 6, 2014 at UFC 181. After losing the first round, he came back in the second round to land a left switch head kick on Gordon, knocking him out. Samman's knockout performance also earned him his first Performance of the Night bonus award.