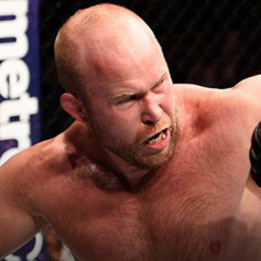 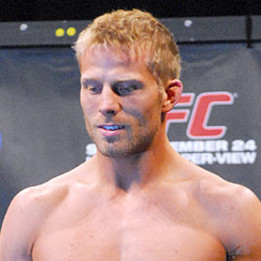 "The Barbarian" "The Promise" 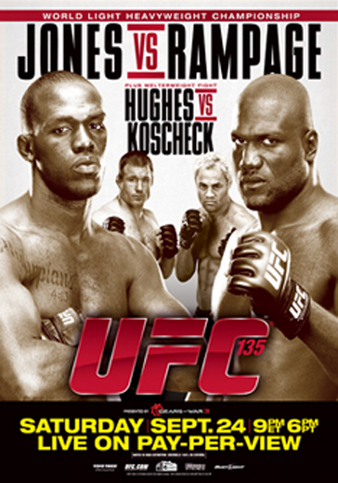 The fourth bout of UFC 135 and first to air on the Spike TV televised portion of the card featured Nick "The Promise" Ring taking on Tim "The Barbarian" Boetsch in a middleweight contest.

Boetsch charged forward with strikes early yet Ring was able to circle out of the way. Ring threw a high kick, blocked by Boetsch, and "The Barbarian" continued to press forward and get in close. Ring caught a front kick, tripped Boetsch to the ground, and worked for position over a turtled opponent. Boetsch escaped and kept pressing the action on the feet, though Ring's effective footwork enabled him to stay out of danger. Ring was just out of range of each big hook thrown by Boetsch, yet a nice uppercut was landed late in the round.

Boetsch again played the role of pursuer in round two, having difficulty catching up with Ring until a nice right connected a minute in. A good uppercut and hook from Boetsch landed, a high kick from Ring was blocked, and then Ring was momentarily dropped with a punch. Ring scrambled up and in the next exchange Boetsch opted to pull guard for a guillotine choke. Ring made his way out and now was able to work from top position in Boetsch's guard. Boetsch made his way up and began landing repeatedly with uppercuts and punches. A trip takedown with 10 seconds remaining put Boetsch in position to work a kimura, looking to have Ring in deep trouble were it not for the horn sounding to save him.

Ring landed some good strikes in close to begin the third round. Boetsch broke free and landed a good left, pressed Ring against the cage and continued to control the pace and tone of the fight. Boestch scored a takedown, couldn't hold Ring down, but then landed a magnificent hip toss that sent Ring sailing onto his back with Boetsch into side mount. Boetsch worked for a kimura, landed some elbows, and closed out the fight in emphatic fashion.

The judges scored the bout 29-28, 29-28, and 30-27 in favor of the winner by unanimous decision, Tim Boetsch. Speaking to Joe Rogan in the post-fight interview, Boetsch commented, "I was trying to land one big punch in the first round, that doesn't work in the UFC... it's beautiful [the throw], good height on the hips there."

Thank you to all of my supporters leading up to #UFC135. Without your help I couldn't have made it here. :)

5 hours and 28 minutes
after

Support the Barbarian by becoming a sponsor. Visit our website for more info. (mgmt) http://t.co/cEETMJAF

4 hours and 40 minutes
after

Thank you SOOOO much to all my family. I'm speechless when it comes down to expressing my gratitude. xoxo

The one-man show that keeps me organized, Matt Stansell my fight manager. Thanks for all that you do!

3 hours and 3 minutes
after

Grant at FML Group, thanks for all your support! Love working with you guys!

2 hours and 58 minutes
after

Thanks to Kevin @ Creative Factor for the creative & printing support! It took several tries to get the banner just right but it looks good!

2 hours and 49 minutes
after

Thank you to my STUNNING Marketing Manager Maja. Your knowledge and expertise are so valuable to me! @YYC_Real_Estate

2 hours and 45 minutes
after

Can't forget Billy Kim, thanks for all your support!

2 hours and 35 minutes
after

Thanks to my boy Rags for all your support!

2 hours and 28 minutes
after

Thanks to Dr. Paul at Pure Health Chiropractic for the back cracks and the wrestling practice!

2 hours and 23 minutes
after

Thanks to Cory Finley from Demon Oilfield and 100Rounds, some of my amazing sponsors that are behind me no matter what!

2 hours and 12 minutes
after

Hey @JugoJuice, can't wait to come back home for a refreshing one! Thanks to your girl Bobbi-Lynn for all the amazing support!

1 hour and 52 minutes
after

Major thanks to @tom_malin and @partymachineYYC for all your support, could not have done this without you! #yyc

1 hour and 42 minutes
after

Hey @roadhousecgy and @yojr, many thanks to your staff and especially to Chris Dobson for the continuing support! #yyc

1 hour and 37 minutes
after

And special thanks to my strength training coach @mjj401, to @MokshaYoga, and @fightingmeins & his team in Lethbridge!

1 hour and 28 minutes
after

Thanks to everyone who helped with training for this fight special thanks to Doug Harder from Bowmont Boxing!

1 hour and 27 minutes
after

Huge shout out to everyone at #BDB MMA from #UFC135, thanks to @briandbird @birdsheila for all your support! #yyc

1 hour and 5 minutes
after

4 hours and 27 minutes
before

20 hours and 19 minutes
before

22 hours and 29 minutes
before

Weigh-in time for UFC 135, I'm sitting in a fighter meeting now and can't wait to eat

23 hours and 2 minutes
before

Still have 24hours and already feeling the effects #ufc135

I'm in Denver getting ready for my fight against Tim Boetsch

If you haven't been training at altitude or simulated altitude with @Hypoxico your lungs will get ripped out fighting here! #UFC135