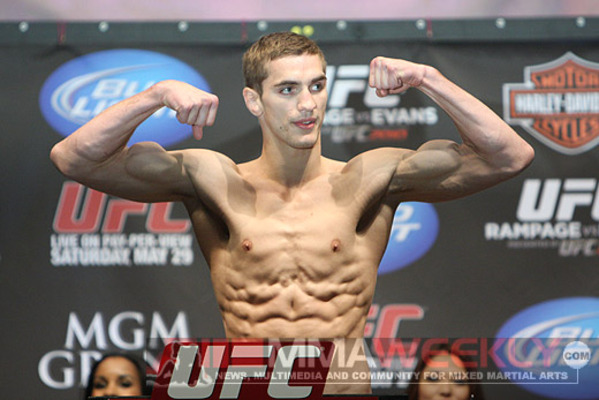 John Hathaway is ineligible for regional rankings due to inactivity.
Fighters must have at least one completed MMA bout in the past two years to be ranked.

Jon Hathaway is one of the most promising young fighters to emerge from MMA's recent "British Invasion." Like fellow Brits Dan Hardy and Michael Bisping, Hathaway has augmented his technical boxing ability with enough of a freestyle wrestling base to keep the fight standing against an average opponent. He passed the biggest test of his young career when he stunned the always-tough "Nightmare," Diego Sanchez, on the main card of UFC 114, completely nullifying Sanchez's wrestling game and then stinging him on the feet with crisp punches.

Sensing Hathaway could be on the cusp of stardom in his home country, the UFC next booked him in one of the featured fights of UFC 120 in London, England, against a heavy underdog in Mike "Quicksand" Pyle. The more experienced Pyle put on the performance of his career, surprising Hathaway both striking and grappling, and handing him his first loss as a professional. Despite the loss, Hathaway showed his toughness, including surviving a modified triangle position where Pyle landed dozens of virtually unblocked strikes that may have caused lesser competitors to submit.

Hathaway is large for a welterweight, and strong. With North American audiences quickly becoming acquainted with him, he figures to be a top contender for years to come.