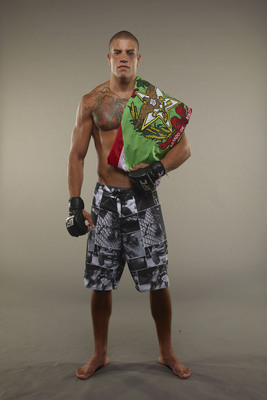 Mafra was born and spent his early childhood in the Brazilian city of Santo André and began training in mixed martial arts as a teenager. He moved to Balneário Camboriú and made his professional debut in the welterweight division in early 2011. He compiled a record of 6 - 0 competing for regional promotions in his native Brazil, before auditioning for The Ultimate Fighter.

In February 2012, it was announced that Mafra would a cast member on The Ultimate Fighter: Brazil, representing Team Wanderlei at middleweight.

Mafra got into the house with a decision win over Samuel Trindade. In his quarterfinal fight, Mafra was submitted (guillotine choke) in the second round by the eventual winner, Cezar Ferreira, and was subsequently eliminated from the competition.

Mafra made his official debut facing fellow castmate, Thiago Perpétuo on June 23, 2012 at UFC 147. Mafra lost the fight via TKO in the third round. Subsequently, Mafra was released from the promotion.

Mafra made a return to the welterweight division and the regional scene in Brazil, where he was able to string a five fight win streak, finishing all of his opponents by way of KO/TKO, before getting a return call to the UFC.

Mafra was tabbed as a short notice replacement as he faced Rick Story on July 16, 2014 at UFC Fight Night 45, filling in for an injured John Howard. Story defeated Mafra via submission in the second round.

Mafra faced Stevie Ray on July 18, 2015 at UFC Fight Night 72. He lost the fight by TKO in the first round and was subsequently released from the promotion.