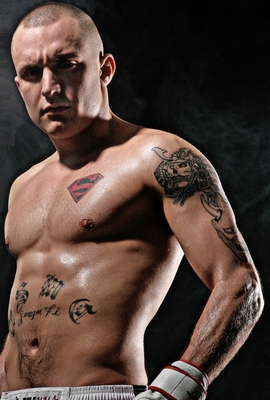 Mike Richman is ineligible for regional rankings due to inactivity.
Fighters must have at least one completed MMA bout in the past two years to be ranked.

A veteran of three tours of duty in Iraq as a Marine Sergeant, Mike Richman knows what it is like to be in a fight. He gave up his career in the Marines to take on MMA full time in 2008. He began fighting on the Minnesota circuit and quickly achieved an 11-1 record including 6 fights in the prolific Brutaal Fight Night promotion. In those wins, he racked up 7 submissions and 2 knockouts. He was tapped to join the TUF 12 cast in 2010. He lost his first fight against Aaron Wilkinson thus he did not make it into the house.

Richman made a big splash on the national MMA scene when he made his Bellator debut against WEC and Bellator vetran Chris Horodecki. He showed excellent striking and cage control in the 1 minute 23 second fight that ended with Horodecki out cold due to strikes. This featherweight fight landed him a spot in Bellator's up coming Season 7 Featherweight Tournament. He would defeat Jeremy Spoon in the opening match before losing to Shahbulat Shamhalaev in the semi-final.

The next season he would make it to the finals with wins over Mitch Jackson and Alexandre Bezerra before losing in the finals to Frodo Khasbulaev. He would also lose Des Green in the quarter finals in 2014.