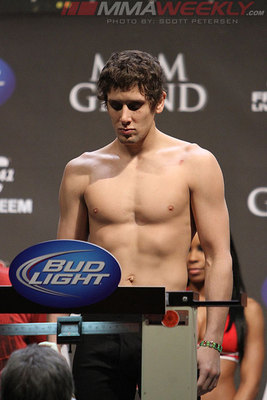 Jimy Hettes is ineligible for regional rankings due to inactivity.
Fighters must have at least one completed MMA bout in the past two years to be ranked.

Jimy Hettes is an American featherweight fighter currently signed to the UFC. He holds a brown belt in Judo as well as a purple belt in Brazilian Jiu Jitsu. He won the gold medal twice at Keystone State games for Judo earning him the nickname Judo Jim at Greg Jackson's training camp. Hettes began boxing when he was 14 years old and at 16  began training BJJ. He has notable wins over Alex Caceres, Nam Phan, and Rob Whiteford. He is currently a head instructor at Northern Jiu Jitsu in Pennsylvania. Of his eleven professional wins, ten have been finishes with all of them coming by submission.

Hettes would win his first five professional fights before winning the Pennsylvania Cage Fight Series Featherweight Championship. He would also win the MASS Featherweight championship bringing his record to 8-0. He was then signed to the UFC and submitted Caceres in his debut fight for the promotion. He would follow that up with a Unanimous Decision victory over Nam Phan. He would drop his next bout to Marcus Brimage and looked to bounce back when he faced off against Steven Siler at UFC 159. Unfortunately, Hettes would have to withdraw from this bout due to injury. He was later matched up with Mike Wilkinson at UFC Fight Night 30 but Wilkinson also had to withdraw due to injury. He instead fought promotional debuter, Rob Whiteford, and was able to secure a second round submission victory. He next took on top contender, Dennis Bermudez, at UFC 171, but would lose by TKO in the third round which put his UFC record at 3-2.