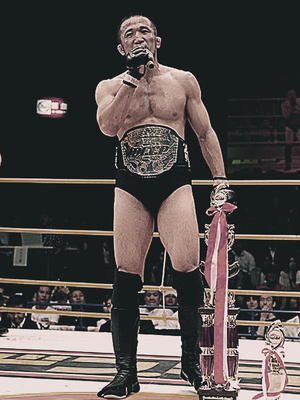 It is impossible to go through the archives of any Japan-based mixed martial arts promotion without seeing Daisuke Nakamura's name crop up at least once, as the journeyman submission specialist is one of the most experienced fighters in the nation's history. In addition to competing for every promotion from DEEP, K-1, and Cage Rage to the world famous PRIDE Fighting Championships, Nakamura is known for his explosive and unorthodox armbar submissions, including four flying armbar victories to his credit.

Nakamura was the DEEP Lightweight Champion, having defeated Yasuaki Kishimoto by unanimous decision at DEEP - 58 Impact for the title. He later defended the belt against veteran Takafumi Ito at DEEP - 60 Impact, stopping Ito in the second round with a flying knee followed up by punches. He then tried to defend his title at DEEP: 62 Impact against one of Lightweight's best grapplers in Satoru Kitaoka. Nakamura would lose by decision and lose his title.

After his loss to Kitaoka, Nakamura would then face Mizuto Hirota at DEEP: 66 Impact on April 29, 2014. In a fight that went all three rounds, Nakamura was defeated by unanimous decision.

Nakamura's next fight, against Shinji Sasaki, took place on October 26, 2014, at DEEP: 69 Impact. This bout too went the distance, and in the end the judges handed out a split draw verdict.