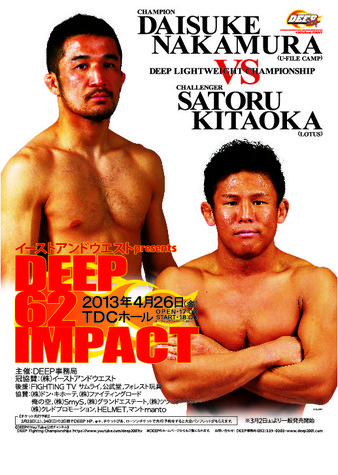 Tapology members can make predictions for upcoming MMA & Boxing fights. DEEP 62 Impact is closed for new predictions. 200 total members made predictions on this event, breaking down as follows below.

Leaderboard of the best predictions by member: DEEP 62 Impact Leaderboard

The event had 3 title fights in which all saw new titleholders be crowned.

In the first title fight of the night, American gaijin Dan Hornbuckle defeated Yuya Shirai by unanimous decision to become the 5th DEEP welterweight titleholder and the first gaijin DEEP welterweight titleholder. After the fight, Hornbuckle called out Shirai's trainer, Ryo Chonan and expressed he wanted to make his first title defense against him.

In the second title fight of the night, DJ.taiki defeated Yoshiro Maeda by TKO in 1:41 of round 2 for the second time in his career in the third fight between them to win the DEEP bantamweight title. Previously both men had competed on 2 occasions trading victories between them including a previous TKO victory in 0:35 of round 2 on March 19, 2006 at Pancrase Blow 2 for DJ.taiki and a split decision win on August 27, 2006 at Pancrase Blow 6 for Maeda.

In the main event and third title fight of the night, Satoru Kitaoka defeated Daisuke Nakamura by unanimous decision to win the DEEP lightweight title. Kitaoka's offense consisted of taking Nakamura down and transitioning and grinding on top of Nakamura to a decision. The fans booed Kitaoka continuously throughout the fight. Despite being booed, Kitaoka still thanked the fans for coming out and staying at the event until the end.

DEEP 62 IMPACT also had  Masanori Kanehara defeat gaijin Wade Choate by submission in 4:16 of the first round with an arm-triangle choke and Akihiro Gono make his full time MMA return in the welterweight division losing by TKO to Taisuke "Goten" Okuno in 2:07 of round 2.

The card also featured Katsuya Toida announce his retirement from MMA after losing a unanimous decision to Seiji Akao after a long 15 year career that began in 1998. With the lose, Toida retired with a record of 13-13-3 (1 NC) including wins over skilled grappler Baret Yoshida and Shooto veteran Yusuke Yachi.