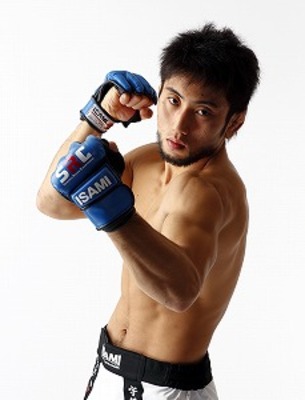 Shunichi Shimizu is a Japanese bantamweight fighter currently signed to the UFC. He trains out of Uruno Dojo represents Team ZST in his native Tokyo, Japan. He was born on January 31, 1985 and is the older brother of fellow MMA fighters Toshihiro Shimizu and Teppei Shimizu. He also has a background in judo and was introduced to the Yoshida Dojo after he finished college. Shimizu has spent most of his career fighting in ZST and is nicknamed “ZST no Tetsujin” which means “Ironman of ZST.” He has also made appearances for Sengoku, Rings, and Pancrase. Of his twenty eight professional wins, twenty three have been finishes including nineteen submissions.

Shimizu started his professional career in 2005 with ZST. in his first eight fights, he would compile a lackluster 1-1-6 record. In late 2006, he would begin to turn his career around. In a twenty two month period, he would earn a 13-2 record to bring his overall record to 14-3-6 with all but one of those fights taking place in ZST. He would begin to alternate wins, losses and draw over the next two years in various promotions. Starting in the middle of 2012, he would begin a five fight winning streak, with three of the wins taking place in the Pancrase promotion.

Shunichi was signed by the UFC in late 2013. He made his promotional debut against Kyung Ho Kang at UFC Fight Night 34 in Singapore but lost by submission with just over a minute left in the fight.

Shimizu fought at the "Lethwei Japan 7: Yuki" event where he took on exciting Lethwei prospect Tun Lwin Moe, in front of a packed Korakuen Hall. Throughout the contest he displayed a fine ringcraft and grappling prowess, often disrupting his foes aggressive foreward motion with clever grappling and clinch work, while also landing clean strikes of his own. Despite this, eventually the Burmese striker's wreckless abandon and relentlessness would turn the contest into a battle for survival. After an exhausting 5 rounds the bout was declared a mandatory draw, with Shimizu perhaps achieving a moral victory under an unfamiliar ruleset, against a quality opponent.