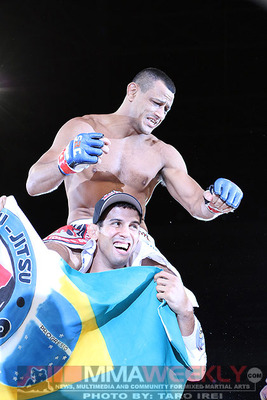 Marlon Sandro is ineligible for regional rankings due to inactivity.
Fighters must have at least one completed MMA bout in the past two years to be ranked.

Among the many Nova Uniao products in Brazil, Marlon Sandro is another that has black belt level Brazilian Jiu Jitsu, and a dangerous striking game to compliment it. Sandro would go 12-0 fighting in Brazil and in Pancrase, where he was the organization's one time featherweight champion. After this streak of dominance in his home country, he would sign to fight for Sengoku.

He won his first two fights in Sengoku, including a devastating knockout victory over current UFC bantamweight Nick Denis. Sandro landed a big uppercut to get the finish, and he only needed 19 seconds to do so. After these two wins, Sandro would suffer his first setback, where he lost a split decision to Michihiro Omigawa. He rebounded by winning his next three fights by knockout (the longest of these fights lasted about two and a half minutes). During that run, he defeated Masanori Kanehara, and won the Sengoku featherweight title. However, he would lose the title in his next outing against Hatsu Hioki; a fight that saw him defending many submission attempts en route to a decision loss. After losing to Hioki, Sandro would sign with Bellator Fighting Championships.

After winning decisions over Genair da Silva and Nazareno Malagarie, Sandro would face Pat Curran in the 2011 Summer Series featherweight tournament final. Sandro was arguably winning the fight until the latter part of round two, when Curran knocked Sandro out cold with a scintillating head kick. This marked the first time Sandro had been finished in his MMA career.

Again, Sandro would get to the final round of the Season Six featherweight tournament, but would again come up short when he lost a decision to Daniel Straus. Prior to the loss, Sandro picked up wins over Rafael Dias, Roberto Vargas, and Alexandre 'Popo' Bezerra.

After his defeat at the hands of Straus, Sandro would pick up wins in his next two bouts. He first defeated Dustin Neace via rear-naked choke at Bellator 81 on November 16, 2012. His next victory would be in the Bellator Season Eight Featherweight Tournament Quarterfinal, where Sandro would beat Akop Stepanyan via majority decision to advance to the tournament semifinals.

On March 7, 2013, Sandro faced off against Magomedrasul Khasbulaev at Bellator 92 in the semifinals of the Bellator Season Right Featherweight Tournament. The fight would go until just after the halfway point of round three when Sandro lose via TKO due to punches.

Sandro's next fight would take place under the Pancrase banner at Pancrase 252: 20th Anniversary. This would mark Sandro's return to the Japanese promotion after five years, his last bout there taking place in 2008. Sandro squared off against Yojiro Uchimura, and after three rounds of fighting, the judges would render a unanimous draw verdict.

Sandro made a successful return to the Bellator cage at Bellator 119, where he battled Chris Horodecki to unanimous decision victory.

Sandro would then again make his return to Japan to participate in a fight against Japanese standout Isao Kobayashi at Pancrase 266 on April 26, 2015. The two fought for three full rounds, and when it was over it was Kobayashi who would emerge victorious via split decision.