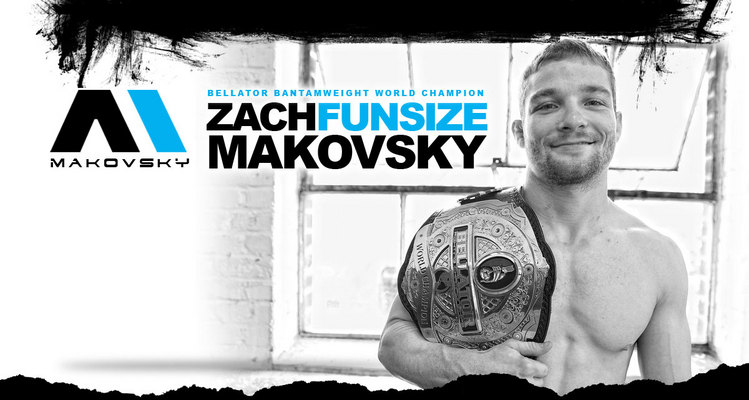 Zach Makovsky is an American flyweight fighter currently signed to the UFC. He is a former NCAA Division I wrestler and trains out of Team Extreme in Philadelphia, Pennsylvania. He made a name fighting across the world for promotions such as Elite XC, M-1, DEEP, and Bellator where he was the inaugural bantamweight champion. He holds notable wins over Ed West and Scott Jorgensen. Zach earned a Bachelors degree in Biology from Drexel University. Besides having a very appropriate nickname for a fighter standing 5 foot 4 inches tall, 'Fun Size' is known as an always dangerous fighter when a fight goes to the mat. Of his eighteen professional wins, seven have been finishes including six submissions.

Makovsky was a standout wrestler in high school and went on to be a walk on to the wrestling team at Drexel University. He was a four year varsity letterman as well as the team captain his senior year. During the off season, he began to train in MMA along side Eddie Alvarez as well as in grappling where he had a 65-7 record in competition. In 2006, he would make his professional debut with a unanimous decision win. Makovsky tallied an 8-2 record in his first ten fights, only dropping submission defeats against BJJ expert, Wilson Reis, and Toshiaki Kitada.

In 2010, Zach would qualify for Bellator's Season Three bantamweight tournament when he submitted Eric Luke at Bellator 21 with a kimura. From there, he defeated Nick Mamalis, Bryan Goldsby, and Ed West to become the first ever bantamweight champion for Bellator Fighting Championships. He would get back to his finishing ways in his next two fights, which were both were non title bouts, when he defeated Chad Robichaux by third round TKO and by submitting Ryan Roberts with a north/south choke. He would lose his Bellator bantamweight strap when he tried to defend it for the first time against Nova Uniao product, Eduardo Dantas. Makovsky was dominated in the fight and would eventually be choked unconscious by the Brazilian from an arm triangle choke in he second round.

In his first fight back after losing the Bellator Bantamweight title, Makovsky faced Anthony Leone in what was a back and forth ground battle. Makovsky would lose by split decision, making it the first time in his career that he had lost back to back fights. Unfortunately for the former champ, he would be cut from the promotion after this loss. Makovsky would drop to flyweight to fight Renzo Gracie product, Claudio Ledesma, under the Cage Fury FC banner. He was successful in his flyweight debut, winning a unanimous decision. He was signed by RFA in late 2013 and was given a shot at the vacant flyweight title which he won by defeating Matt Manzanares at RFA 11.

Makovsky would be picked up by the UFC in late 2013 when he was asked to step in on short notice to fight Scott Jorgensen at UFC on FOX 9. Despite being a sizable underdog, he made the most of his UFC debut, defeating Jorgensen by unanimous decision. He next fight was matched up with Josh Sampo at UFC 170 and would pick up a unanimous decision.