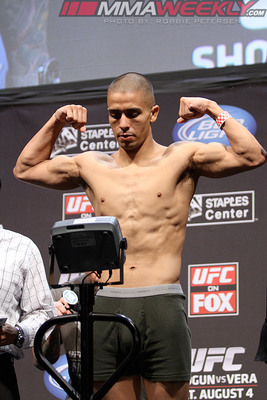 John Moraga is ineligible for regional rankings due to inactivity.
Fighters must have at least one completed MMA bout in the past two years to be ranked.

John Moraga began his MMA career in 2009 for the Rage in the Cage promotion where he went on a 6 fight win streak until he met John Dodson and lost by a Unanimous Decison. Moraga bounced back and rattled off another 4 wins, finishing 3 of his opponents on his way to getting signed by the UFC. In his first fight for the promotion he would finish Ulysses Gomez with elbows and punches for the 1st round TKO and a good start to his UFC career.

Moraga was an NCAA Division 1 wrestler at Arizona State University on the same team as fellow UFC fighters, Ryan Bader and C.B. Dollaway. He splits his training between Arizona Combat Sports and the MMA Lab. Known primarily as a grappler and submission expert, he showed off a potent standup attack in his UFC debut. He again demonstrated his grappling prowess in his "submission of the night" victory over Chris Cariaso at UFC 155.

Moraga has been deemed to be next in line for the title shot and was set take on Demetrious "Mighty Mouse" Johnson at the Ultimate Fighter 17 Finale. However, Johnson pulled out of the fight with an undisclosed injury, and the bout was rescheduled to July 27, 2013 at UFC on Fox 8.

During the fight, Moraga was unable to stop Johnson's constant takedowns. Despite clipping Johnson with an uppercut in the 4th round, Johnson's ground game and experience was too much for Moraga, who tapped to an armbar in the 5th round.

Trying to get back on track to another title shot, Moraga faced experienced flyweight, Dustin Ortiz at UFC Fight Night 35. Moraga was awarded a very controversial split decision in a highly competitive fight. Moraga will get a chance to avenge 1 of his 2 losses when he faces off against John Dodson at UFC Fight Night 42.