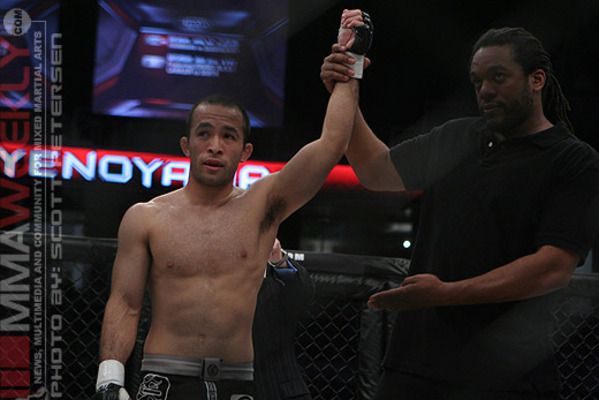 Darren Uyenoyama is ineligible for regional rankings due to inactivity.
Fighters must have at least one completed MMA bout in the past two years to be ranked.

Darren Uyenoyama is an American flyweight fighter currently signed to the UFC. He is a black belt in Brazilian Jiu Jitsu under Ralph Gracie and trains out of Faito Tamashii Combat Club in San Francisco, California. He has previously fought for Deep, Strikeforce, Dream and Shooto. He has notable wins over Rambaa Somdet, Norifumi Yamamoto and Phil Harris. Of his eight wins, five have been finishes including four submissions.

Uyenoyama began his professional career in 2002. He was already known as a grappling ace, but when he was contacted by Deep to fill in for a fight in Tokyo, he accepted. He later said that he only took the fight because he needed money for his upcoming wedding. In that fight, he would defeat well known Thai fighter, Rambaa Somdet, by unanimous decision. After this fight, he would take a five year hiatus from MMA competition in an attempt to start his own gym.

Darren would return to action in 2007 taking two fights near his home in California and would go 1-1. In early 2008, he would be signed by Strikeforce and would pick up two quick first round submissions in less than two months, the first of which was at featherweight and the second at bantamweight. He would take one fight with Dream, losing by unanimous decision, before again fighting for Strikeforce where he picked up a decision victory. It would take an eighteen month leave from the sport, but would return in April, 2010 when he lost a second round submission for Deep. He would take the third fight of his career in Japan when he took on Shooto World champion Shuichiro Katsumura in a non title fight. He would finish his opponent by TKO in the second round.

Uyenoyama would sign with the UFC in 2011. After not fighting for fourteen months due to a hand injury, he made his promotional debut at UFC on Fox 1 against a heavily favored Norifumi Yamamoto at bantamweight. Darren would surprise many when he controlled the far more experienced Yamamoto on the way to a unanimous decision victory.

In 2012, Uyenoyama dropped to the newly added flyweight division and was briefly linked to a fight with John Dodson at UFC on Fox 3, but would later be moved to a fight with Louis Gaudinot at UFC on FX 5. When Gaudinot pulled out with an injury, he was replaced by Phil Harris who he would beat by a second round rear naked choke to pick up his first win at 125 pounds. He would take on former flyweight title contender, Joeseph Benavidez, at UFC on Fox 7 who he would lose to by TKO due to a body kick and punches with only ten seconds left in the second round. Darren was supposed to fight John Moraga at UFC on Fox 9, but pulled out due to injury two weeks before the fight. He was replaced by Turkish national wrestling champion, Alptekin Ozkilic who was making his UFC debut.