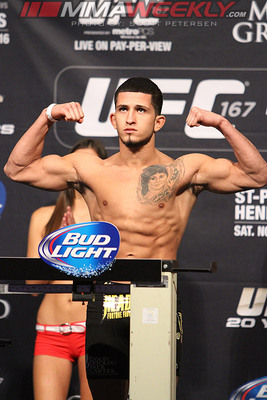 Fighting for a major organization has made Sergio Pettis ineligible for regional rankings.

Sergio "The Phenom" Pettis is the younger brother of former WEC champ and current UFC Lightweight champion, Anthony Pettis. Sergio seems to be following in his brother's footsteps and has an impressive start to his MMA career. Like his older brother, he trains out of Roufusport Academy in their home town of Milwaukee, WI. He went 3-0 as an amateur before making his pro debut in September 2011 winning his first pro fight with a head kick knockout.

Pettis would win his next 3 fights finishing 2 of his opponents and winning a Unanimous Decision victory. He has fought mostly at bantamweight but with the addition of the flyweight division in the UFC, Pettis has transitioned to fighting in the 125 lb division full time. He currently has signed a 5 fight deal with Resurrection Fighting Alliance although he does continue to appear in NAFC shows put on by his gym. His first fight with RFA was against Jimmy Jones. He would win the fight by Unanimous Decision. He followed that up with another decision victory over Josh Robinson for NAFC.

Pettis was supposed to have his toughest test when he was scheduled to face former UFC bantamweight fighter Jeff Curran in the main event of RFA 8 on June 21st, 2013 for the vacant flyweight title. However Curran pulled out of the fight and Pettis would instead face Dillard Pegg. He was able to quickly finish that fight with a 51 second knockout to win the first ever RFA 125 lb title and extend his undefeated streak to 8. He is next set to appear again in NAFC against James Porter.

After his win over Porter, Pettis was signed by the UFC. His BJJ coach, Daniel Wanderley, stated that the UFC had been interested in the younger Pettis earlier but his main trainer, Duke Roufus, had wanted Sergio to first gain more experience. Sergio entered the UFC promotion as a bantamweight and was expected to make his promotional debut at UFC 167 against Vaughan Lee. However, his opponent would pull out due to injury and he eventually took on Will Campuzano who he was able to defeat by unanimous decision.

In his next fight Pettis would suffer his first professional setback as he would face a UFC veteran and TUF alumni Alex Caceres. Despite showing much crisper technical striking than in his previous fight and landing multiple punches and kicks, Sergio was knocked down by a heavy punch from Caceres in the second round and had his back taken in a scramble late in the third. That proved to be his undoing, as it was enough for Caceres to sink in a Rear-Naked Choke and force Pettis to tap out with just 21 seconds left in the fight. Even though he was on the losing end of the fight he would earn Fight of the Night honors for his effort.

Sergio's next bout would come against Yaotzin Meza at UFC Fight Night 49 on June 7, 2014. Sergio would go on to win a unanimous decision. Sergio's next fight would come against Matt Hobar at UFC 181. Once again, a back and forth unanimous decision victory earned Pettis a Fight of the Night bonus. This was also the sixth time in UFC history that a pair of brothers have fought on the same card. He woudl fight on the same card as Anthony again abut would lose by TKO to Ryan Benoit at UFC 185.