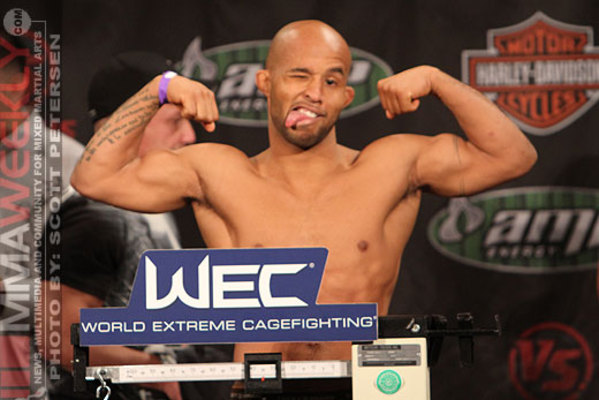 Fighting for a major organization has made Demetrious Johnson ineligible for regional rankings.

Johnson grew up in Parkland, Washington where he attended Washington High School and was a stand out athlete in track, wrestling and baseball. In wrestling, he would go on to place 3rd and 2nd in state his junior and senior year. Johnson also played baseball at a high level with a Select Travel team, Haskey Hurricane Baseball Club, the team would go on to place 9th in the nation at the AAU World Series and 3rd in the nation at the USSSA World Series. Johnson began his career in 2007 and won his professional debut via first round KO. Johnson then appeared on multiple local shows and won his next 8 fights, including four in a row by submission. Johnson fought at the Alaska Fighting Championships in Anchorage and won via head kick KO, which earned him a deal with the WEC.

Johnson faced Joseph Benavidez in the finals of the UFC Flyweight Tournament on September 22, 2012 at UFC 152. Johnson would make history in a closely contested fight with nonstop action fought at a frenetic pace by defeating Benavidez via split decision (48-47, 48-47, 49-46) to become the inaugural UFC Flyweight Champion. Johnson would defend his belt for the first time against TUF 14 winner John Dodson winning by a Unanimous Decision. He was set to defend the title for a second time against John Moraga at the Ultimate Fighter 17 finale, but an injury required that Johnson pull out of the fight. The bout was then rescheduled to headline the UFC on Fox 8 card on July 27, 2013. Johnson would defend his title for the second time and pick up his first finish as he submitted Moraga in the 5th round. The armbar finish would also earn Mighty Mouse Submission of the Night honors.

Mighty Mouse would continue his title run defending his title against Joseph Benavidez in a rematch. This time however Johnson would not leave it to the judges finishing Benavidez in the first round by TKO also earning the Knockout of the Night. He would successfully defend his title again at UFC 174 winning a decision over Ali Bagautinov.