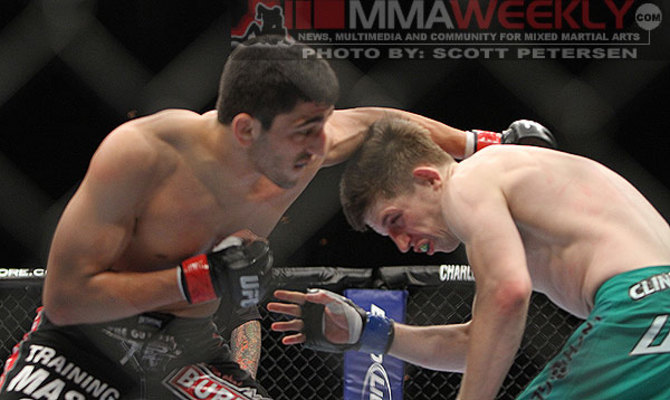 Fighting for a major organization has made Ramsey Nijem ineligible for regional rankings.

Ramsey Nijem has a background in wrestling, he was 27-5 his senior year in high school and went on to wrestle for Utah Valley University. In 2008 Nijem would start his MMA career training at Riven Academy. Nijem decided to go turn pro right away and won his first fight by submission. He would end up with a 4-1 record when he got his big break on The Ultimate Fighter: Team Lesnar vs. Team Dos Santos. Nijem would go on to defeat Charlie Rader, Clay Harvison and Chris Cope to secure a spot in the finals. Nijem ended up losing on The Ultimate Fighter 13 Finale to Tony Ferguson in the first round by KO.

Ramsey bounced back with a unanimous decision victory over Danny Downes and a first round TKO finish of C.J. Keith. He would then  face fellow TUF Alumni Joe Proctor at UFC on FOX 5 and win by Unanimous Decision. His three fight win streak would come to an end however when he was TKO'd in the second round by Myles Jury. At UFC Fight Night 26, he took on James Vick, but would be submitted in the first minute of the fight. Riding the first two fight losing streak of his career, he took on Justin Edwards at UFC Fight Night 35 and was able to come away with a unanimous decision victory. He would follow that up with a performance of the night TKO over Beneil Darius. He would drop his next fight to Carlos Diego Ferreira getting TKO'd in the second round but would earn a Fight of the Night bonus.

Nijem is scheduled to face undefeated Andrew Holbrook, at UFC on FOX 16: Dillashaw vs. Barao 2; in Holbrook's UFC debut.

Episode 4 Nijem def. Charlie Rader by Rear Naked Choke at 3:31 of Round 2

Episode 8 Nijem def. Clay Harvison by Rear Naked Choke at 0:56 of Round 1

The Ultimate Fighter 13 Finale Tony Ferguson def. Nijem by KO (Punches) at 3:54 of Round 1