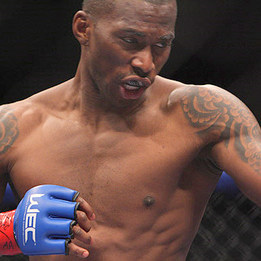 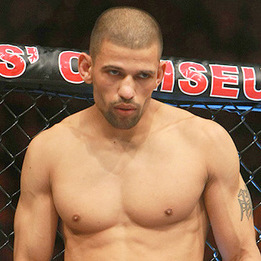 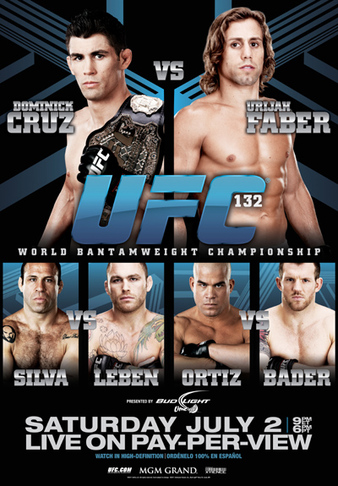 The second bout of UFC 132 featured Andre Winner taking on Anthony Njokuani in a lightweight contest. Winner entered the bout 2-3 in his prior UFC fights, while Njokuani was 0-1 in the UFC (though 4-4 in combined WEC and UFC fights).

Both fighters came out looking dangerous and composed in their standup. Njokuani connected with the first meaningful punch and had Winner momentarily stunned. Njokuani mixed it up with a nice combination followed up by a body shot, and then a spinning elbow. Winner landed a few shots of his own, yet the varied attack from Njokuani appeared more effective in the early going. The intensity of the exchanges increased as the round unfolded, Njokuani effective with an uppercut and slipping many of Winner's punches. Njokuani rocked winner late in the round and swarmed forward attacking. Winner somehow managed to keep standing after getting brutalized with punches and vicious knee strikes to the head. Winner showed tremendous heart and courage as he survived the onslaught and made it to the second round of what might have been a 10-8 beating.

Andre Winner came out and attacked in round two, but Njokuani slowed him down immediately with a stiff jab. Anthony threw a head kick, partially blocked, but demonstrating again his more effective and unpredictable standup game. A sweet combination left Winner staggering and up against the fence again. Winner broke free, Njokuani landed a good punch to the body, and briefly landed a takedown. Winner landed a nice left hook and Njokuani whiffed on an uppercut counter. The pace slowed somewhat and with 90 seconds remaining in the round the fight started to look more competitive. Njokuani kept his opponent at a distance with kicks and the round came to a close.

Round three opened with Njokuani looking methodical and not over-committing, knowing he was well ahead on the scorecards. Winner threw a head kick, blocked, and Njokuani came back with a nice combination. Time ticked down quietly until Njokuani shot for a takedown with 90 seconds left. Winner stuffed it and landed a nice elbow in the clinch. Njokuani appeared content to let the clock run out without taking unnecessary risk and looked to have won a one-sided fight.

Wow the fear @Janine1001 has spread among family and friends,she has cast her shadow of terror,lol

Wow #semtex was not joking,he's bumping #nsync on the drive home lol

#BritishAirWays are full of shit!

@UrijahFaber What up bro....Thank you for n amazing had a blast.

"@Fighterstrength: @AndreWinner same. When u back ?"I'm back 2morro morning,this flight has been so long!

2 days and 32 minutes
after

2 days and 31 minutes
after

Has any1 seen the green lantern or transformers 3,if so r they worth a watch in the cinema?

2 days and 22 minutes
after

"@dazzab84: @AndreWinner DAMN!! I hate it when that happens!! hope you got plenty to keep you occupied fella ?"Well I got #semtex with me

Omg the flight which got cancelled last night which is ment to leave at 1pm is now 3.30pm,I just want to get home lol

Stuck at the back of the line that is moving nowhere lol http://yfrog.com/h2tx3bgj

Just had my 1st Eggs Benedict and it hit the right spot,now off to see if I can get on this flight and get my arse home

#BritishAirWays r being dicks,1st the plane is cancelled then they say that they will get a hotel which when I get there I have to pay 4 it

My flight has just been cancelled so I'm stuck in Vegas

Thanks for all the support guys,it means alot

"@RossTheRealDeal: Iv decided to go for "children of men" with Clive Owen!! Thanks for the choices tho"its not great

I want to give a big big thanks to Saekson Janjira because with out him I couldn't have made it this far. His... http://fb.me/UCXXS8qF

First of all I want to thank my coach Nick Blomgren for all the hard work he put into training me, and I also want... http://fb.me/QTE1nb1G

Sorry to all the peeps I let down 2nite.I love all who support me thru thick and thin

9 hours and 36 minutes
after

Nuff love to mike and daley 4 doing my corner

7 hours and 22 minutes
after

7 hours and 3 minutes
after

Thanks to #Roughouse,#UTC,@Fighterstrength,@victorestima,ChrisPyatt,@GeorgesStPierre and the boys @ Tri Star

6 hours and 59 minutes
after

15 hours and 49 minutes
before

19 hours and 23 minutes
before

22 hours and 24 minutes
before

22 hours and 51 minutes
before

23 hours and 31 seconds
before

Alright everyone here it comes @ufc fight fans are you readdddy!

23 hours and 8 minutes
before

Thanks guys! RT @AmmoToGo: Good luck to @anthonynjoku @ufc 132 at the MGM Grand in Las Vegas this weekend!

23 hours and 11 minutes
before

Killing time watching Antoine Dodson,bedroom intruder,no matter how many times I see it I still laugh

1 day and 18 minutes
before

Yo @DiegoSanchez505 how's Vegas treating you?!

I'm on weight. Stay tuned @ufc fans I have something for you later today!

I think my baby boy is gonna have his first words tmrw. Yes it's really early, but I just have this feeling....@ufc

Had fun throwing the first pitch at Cashman Field.. After throwing that pitch I know I should just stick to fighting....Hahahahaha

Be on notice twitter- I have something coming for you in the next couple days. If your not following me now.....

If your in Vegas make sure and stop by the @Gunstore They love UFC and have fighter signings all the time!

This dry Vegas Climate is giving me a soar throat

Glad that @MichaelJWinner #semtex are here at the MGM

the turbulence into Las Vegas is always the worst

4 days and 45 minutes
before

Excited to finally wear @TapouT in the octagon! @TAPOUTSKRAPE ya boiiiiiii

That was n amazing fight.

@danhardymma live and let die its the 1 in hati isn't it?with roger moore where he runs over the chocs heads

Well done @deanamasinger,heard it was a good performance

I think I have brought the english rain to Montreal,its not stopped raining since I've been here lol

@danhardymma ip man 3 is out I think well u can pick a copy at a barbers,lol,I wonder what package he will deliver this time lmao

Why is that when ur getting off a plane it always seems like its the slow mutha fuckers at the front that hold evey1 up,get ur bag and do 1!

"@GarethBOXUFC: I'm talking boxing and haye v klitschko with paul and andy"the face was great,looking forward to that fight

"@chokewho: @AndreWinner Nice. Who are your picks for @UFC Live? No sitting on the fence"which fights and I will go with a prediction

"@chokewho: @AndreWinner Nice. Who are your picks for @UFC Live? No sitting on the fence"I'm shit at predictions

On the coach to Heathrow,kinda surprised how nice the coach is, defo better than the last time I travelled in 1