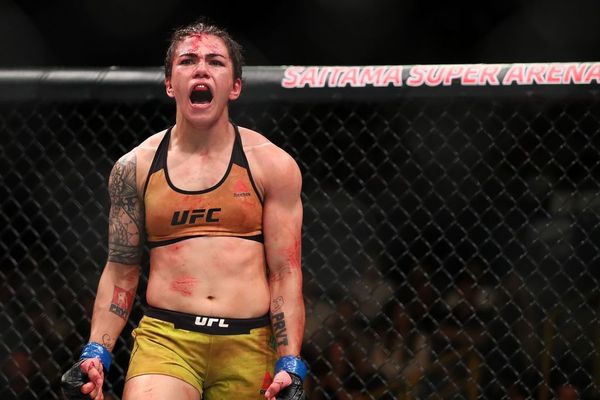 Fighting for a major organization has made Jéssica Andrade ineligible for regional rankings.

Watch this short documentary clip featuring the lead-up to the UFC debut of Jessica Andrade.

Jessica Fernanda da Costa Andrade is a brazilian fighter currently signed to the UFC. She was born on September 25, 1991, in Umuarama, Paraná, Brazil, to farmer parents Julio and Neusa Andrade. She has finished 17 of her 23 wins including 8 submissions and 9 (T)KOs.

Her nickname means 'piledriver' in English. Her teammates coined the nickname bate estaca (piledriver), a term used in Brazil for body slams ,after one of her first amateur BJJ competitions, when Andrade was caught in an armlock, she panicked and performed the illegal move on her opponent by lifting her and then slamming her head directly into the mat. To Andrade's surprise, she was immediately disqualified.

Andrade began her career fighting around Brazil and was able to compile a 9-2 record in her first nineteen months as a professional. She was signed by the UFC in early 2013 and made her debut against Liz Carmouche but would lose by TKO in the second round. This was the first fight in UFC history that featured two openly gay athletes. She next fought Rosi Sexton at UFC Fight Night 30. Although Andrade dominated much of the fight, she was unable to finish her opponent and picked up her first decision victory. She was next set to take on The Ultimate Fighter 18 winner, Julianna Pena, at UFC 171, but Pena suffered a severe knee injury.

Andrade looked to pick up her second straight win against Raquel Pennington at UFC 171 and did so, utilizing a mixed strategy of quick striking and a suffocating ground attack, winning by split decision (29-28, 28-29, 29-28).

Most fights in UFC Women's history (21)

Performance of the Night (Five times)

Fight of the Night (Four times)