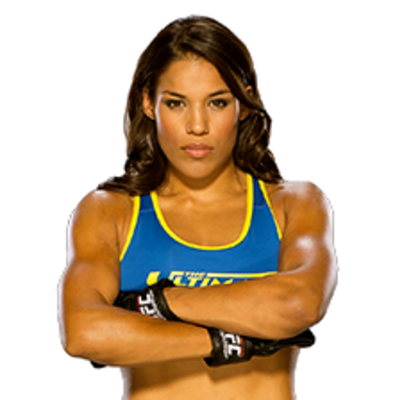 Fighting for a major organization has made Julianna Peña ineligible for regional rankings.

Julianna Pena began training in a cardio kickboxing class back in 2008 and took her first amateur fight in 2009.

Pena was a competitor on TUF 18. She won her fight to get into the house against Gina Mazany via a lopsided Decision. She was later picked as the first overall pick by Miesha Tate.

On the 2nd episode of TUF 18 Juliana faced Shayna Baszler. The first round was a close fight with Pena out striking Baszler, But Shayna got it to the ground and stole the round. In the second round Pena beat Shayna up with knees to the face then submitted her with a Rear naked choke . On Episode 11 of TUF 18 Julianna faced Sarah Moras whom she lost to a year prior. In the first round they traded punches for a minute before Sarah went for the take down, Julianna ended up on top and smothered Sarah for four minutes. In the second round Julianna again ended up on top and smothered Sarah for most of the round. She opened up a cut on Sarah and finished her with a guillotine.

Pena would then face off against the professional boxer Jessica Rakoczy in The Ultimate Fighter Finale 18, the match would be the Co-Main Event of the evening. Pena would get the TKO finish with only 1 second left in the first round to become the first ever women's Ultimate Fighter winner. Her next test was supposed to be at UFC 171 when she was set to face off against Jessica Andrade. However during training she suffered torn ACL, MCL, LCL, meniscus and hamstring and could be sidelined for up to 2 years. After a long layoff she will get back in the cage against Milana Dudieva at UFC Fight Night 63.