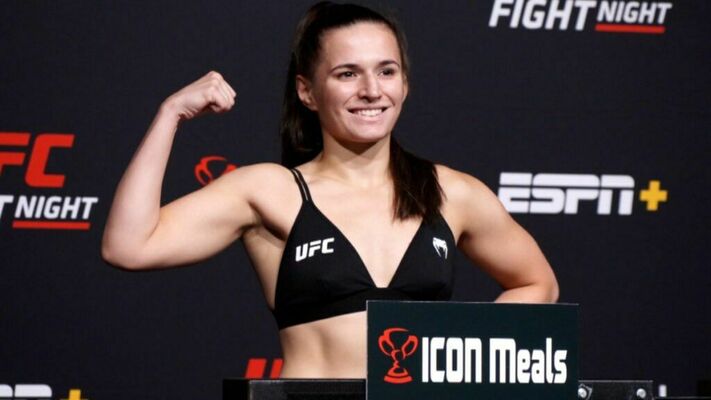 Fighting for a major organization has made Erin Blanchfield ineligible for regional rankings.

Erin "Cold blooded" Blanchfield is an up and comer fighting in the invicta fc promotion.  She got the name cold blooded from her father. She is undefeated at 3-0 and she is only 19 years old. She won her only amateur fight by armbar in round one.
She made her pro debut on march 24 2018 at CFFC 70. She fought whittany pyles and won by docter stoppage after round 1.  Blanchfield made her invicta debut on July 21 2018 at invicta fc 30. She fought Britney cloudy and won by split decision.
On November 16th 2018 Blanchfield fought Kay Hanson at invicta fc 32. She won the fight by majority decision.

Blanchfield is scheduled to face tracy cortez at invicta fc 34 on February 15th 2019.

Now she is 22 and probably the biggest prospect in the UFC. In her UFC debut she faced the tough Sarah Alpar, Blanchfield dominated the fight, hurt her multiple times and drowned her on the ground. The fight garnered scores of 30-26, 30-25, 30-25, even with some media outlets scoring it a rare 30-24. She was scheduled to fight Maycee Barber but Barber had gotten injured highly touted Miranda Maverick stepped up to face Blanchfield. Blanchfield out on another masterclass with a dominating grappling performance, while it was more even on the feet, Blanchfield still got the best of her everywhere.