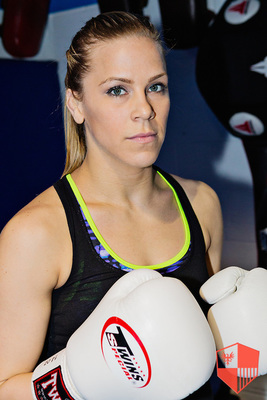 Fighting for a major organization has made Katlyn Chookagian ineligible for regional rankings.

Katlyn Cerminera Chookagian was born December 28, 1988. Chookagian was born in Quakertown, Pennsylvania where she graduated from Quakertown Community Senior High School. Her first job was serving pizza at q-mart where she and holds the record of most slices fit into her pocket. Chookagian holds a bachelor's degree in Business Management and Marketing from Fairleigh Dickinson University. During her early MMA training days, Chookagian worked as a bartender at the W Hoboken Hotel in Hoboken, New Jersey. Chookagian is of Armenian descent.

Chookagian started training karate when she was four years old, later taking up boxing and no gi grappling as a teenager. She won the Pennsylvania Golden Gloves at age sixteen and also claimed a tri-state area kickboxing title. Chookagian continued competing in boxing and kickboxing throughout college before talking a year off of striking disciplines to train Brazilian jiu-jistu. She is now a brown belt in that discipline. She then met coach Jamal Patterson, who helped her make the tradition to MMA. Chookagian made her MMA debut in 2012 and went 7-0 as an amateur. Chookagian now trains at Renzo Gracie BJJ.

Chookagian made her professional debut in 2014 and carried another 7-0 start into the UFC, claiming Flyweight and Bantamweight Championships in the Cage Fury Fighting Championships along the way. Chookagian made her UFC debut at UFC Fight Night: McDonald vs. Lineker on July 13, 2016. She defeated Lauren Murphy by decision. After losing to Liz Carmouche (UFC 205) and going to a split decision with Irene Aldana (UFC 210), Chookagian moved back down to Flyweight, where she has remained ever since. She won four of her next five fights, all by unanimous decision, to earn a title shot against Valentina Shevchenko at UFC 247. Chookagian would be defeated by third round TKO, getting trapped in the crucifix position and battered from above.

Chookagian has since won five of her last six fights, all by decision. Her only other UFC losses are to Jessica Eye by split decision (UFC 231) and Jessica Andrade by first round TKO (UFC Fight Night: Ortega vs. The Korean Zombie). She holds two victories over fellow kickboxer turned MMA fighter Jennifer Maia (UFC 244 & UFC on ESPN: Kattar vs. Chikadze) and in her most recent bout won Fight of the Night honors for her split decision win over Amanda Ribas (UFC on ESPN: Błachowicz vs. Rakić). She is set to take on Manon Fiorot at UFC 280.

Chookagian is 11-4 in the UFC and is tied with Valentina Shevchenko for the most wins in the Flyweight Division.