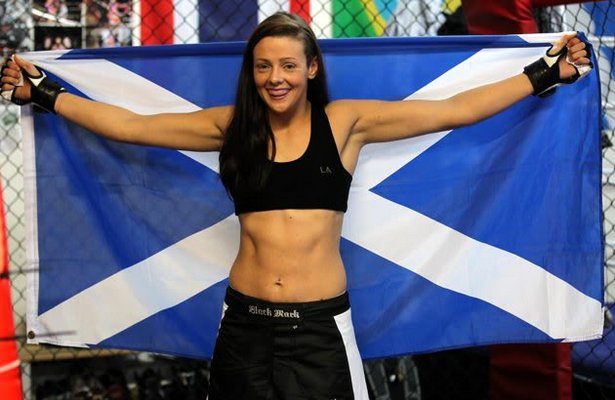 Fighting for a major organization has made Joanne Wood ineligible for regional rankings.

Born on the 23rd of December of 1986 in Glasgow, Scotland, Calderwood has been involved in Muay Thai Since the age of 13. She found the sport of Muay Thai one day when her mother asked her to accompany her brother to a session. Instantly Calderwood feel in love with Muay Thai.

Calderwood had to work in several jobs growing up including working in a hospital after her high school days. In the hospital, Calderwood helped take care, monitor and assist children and people who were on ventilation machines. The job was a daily 12 hour shift which made training for Calderwood difficult as it drained her energy and it made training difficult for her. Eventually she found a different gym in which she began training and working in allowing her to commit full time to training.

Despite her success in Muay Thai, Calderwood began training in other martial arts and eventually transferred over to competing in MMA where she made her debut on the 25th of February of 2012. Calderwood expressed she transferred over to MMA because it was her desire to compete for frequently since she was only getting an average of 2 fights per year in Muay Thai due to lack of competition and even then the promoters were having to look up and fly in foreigners to fight Calderwood.

In mixed martial arts, aside from competing in Invicta FC, Calderwood has also competed in other organizations such as On Top Promotions in her native country of Glasgow, Scotland where she made her successful debut defeating Noellie Molina in just 3:13 o the opening round of the fight.

Aside from On Top Promotions, Calderwood has also competed in Super Fight League in India and in Cage Warriors Fighting Championship in England where she has also found success defeating the likes of Lena Oychynnikova coming in as a late 4 weeks replacement, Ainara Mota and Sally Krumdiack.

Calderwood has expressed in interviews that she looks up to former UFC middleweight champion Anderson Silva. It is evident her admiration for him as she resembles and uses various of his striking techniques in her fights such as the famous standing Anderson back elbow.

Due to her exciting striking skills and fighting style, Calderwood is truly a fan favorite among mixed martial arts fans.

Following the conclusion of the Ultimate fighter, Calderwood faced Korean prospect, Seo Hee Ham at The Ultimate Fighter 20 Finale . Calderwood would go on to win a very sound via unanimous decision.

Coming in at a -700, Calderwood was a heavy favourite as she faced UFC newcomer, Maryna Moroz at UFC Fight Night 64: Gonzaga vs. Cro Cop 2. Moroz came out with an explosive start catching Calderwood with several punches and rocking her. Moroz was able to lock in a deep armbar that forced Calderwood to quickly tap. To the shock of many Moroz broke Calderwood's undefeated record only 1:31 in the fight.

Calderwood would look to redeem herself after her upset loss to Moroz, when she faced Cortney Casey-Sanchez, at
UFC Fight Night 72: Bisping vs. Leites. Originally slated to face fellow TUF 20 veteran Bec Rawlings, but instead faced UFC newcomer Sanchez, after Rawlings dropped out of the bout due to an injury. In Round 1, Calderwood was almost finished by Sanchez, after being rocked late in the round, Calderwood rallied back to win the next two rounds and was awarded the decision victory. The UFC also saw fit to award Calderwood and Sanchez the $50,000 Fight of the Night award for their performance.

It was confirmed on January 7th that Joanne Calderwood will be leaving The Griphouse in her home country of Scotland, to join the Tristar Gym in Montreal.