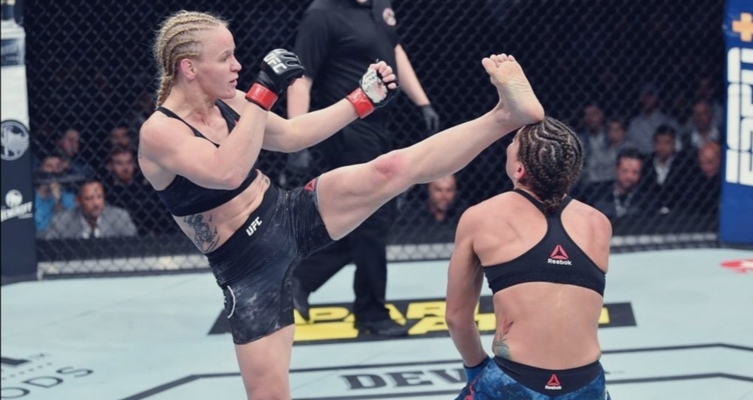 Fighting for a major organization has made Valentina Shevchenko ineligible for regional rankings.

She is a 2nd Dan Black Belt and Master of Sport in Tae Kwon Do.

An international Master of Sport in Muay Thai.

A Master of Sport in boxing.

A Master of Sport in kickboxing.

and a Black Belt and Master of Sport in Judo.

Shevchenko fights from a southpaw stance.

Her pro boxing record is 2-0

Valentina Shevchenko was born March 7th 1988 to a fighting family in Bishkek, Kyrgyzstan. Her older sister Antonina Shevchenko is a multiple time Kickboxing and Muay Thai world champion, and her mother, Elena Shevchenko is a 3rd degree Black Belt in Taekwondo and President of the Federation of Thai Boxing in Kyrgyzstan. Since beginning her martial arts career at the age of 5 Shevchenko has excelled in virtually every discipline she has attempted.

Boasting a staggering 55-1 combined record across Muay Thai and Kickboxing.  Shevchenko also dipped her toe into boxing chalking up a pair of professional victories in her adopted country of Peru. Her MMA career began at the age of just 15 submitting Mi Choi Kim in the first round at a WXF event in South Korea. Following this Shevchenko took K-1 and Savate bouts in Russia before returning to MMA and earning her 2nd, 3rd, 4th and 5th first round submission victories at events in Kazakhstan, Russia and South Korea once more.  At 5-0 Shevchenko switched focus to collecting IFMA Muay Thai world titles but after a 4 year absence returned to MMA and made her American debut under the C3 Fight banner.

Shevchenko  tasted her first defeat on her professional record, loosing by second round TKO due to cuts to the future UFC title contender Liz Carmouche. Licking her wounds as a mixed martial artist for the first time Shevchenko returned to happier hunting grounds in Seoul by defeating Kazakh debutant Akjarkyn Baiturbaeva by decision. With the ship righted Shevchenko took another hiatus from MMA, decamping in Lima, Peru where she would collect her boxing scalps, World Combat Games Gold, and a veritable myriad of continental and world Muay Thai and K-1 titles.

After three and a half years way from MMA Shevchenko made yet another return, this time balancing kickboxing demands with a professional MMA career.  After a pair of TKO's over Ecuadors' Priscilla Orellana and Brazil's Hellen Bastos for Fusion FC in Peru she then claimed the biggest MMA scalp of her fledgling career, taking a decision victory over Jan Finney for Legacy FC.

Bigger challenges awaited the devastating striker and although cancelled bouts for Legacy FC against Carina Damm and Kalindra Faria have curtailed her progress, It was undeniable that Legacy FC had a future star on their hands.

On January 28th 2017 Shevchenko faced Juliana Pena on UFC on fox 23. She won the fight by armbar submission in round two.

On September 9th 2017 Shevchenko challenged for the UFC bantam weight championship In a rematch against Amanda Nunes who is one of only two opponents who has beaten Shevchenko and again Shevchenko lost a very close fight by split decision.

February 3rd 2018 was Shevchenko's first UFC fight in the newly formed Flyweight division, a much better fit for her size than Bantamweight where she came up short twice against the G.O.A.T. of female MMA Amanda Nunes. For her inaugural fight she drew the undefeated Priscila Cachoeira. Shevchenko dominated the fight until 4:25 of round two when the ref waived it off.

Her first title defense was against Jessica Eye which ended when Valentina donated her shin to the Jessica Eye Astro-Traveler foundation with perhaps the most devastating head kick KO in the female division. The kick sounded like a baseball bat  and left Jessica Eye unconscious and motionless for a frightening amount of time. Joe Rogan said appropriately  Valentina Schevchenko is an assassin and she certainly fit the title.

She followed up on her performance of the night by getting sweet revenge in the form of a unanimous decision against Liz Carmouche who was the only other person other than Amanda Nunes she had previously fell short to. The fight was lopsided and supported most peoples belief that the first fight in which an up kick had caused a cut that the doctor felt was to severe to continue was a fluke and the better fighter was not the one who won that night.

Her third defense saw her returning to her KO ways with a third round TKO over Katlyn Chookagian.

Her fourth defense was on a card in which Valentina and her sister Antonina Shevchenko both fought and were both victorious. Valentina fought a gritty Jenifer Maia to a Unanimous decision and Antonina got  a second round TKO. It was the first time the UFC has ever had sisters fight and also the first time sisters have won on the same card.