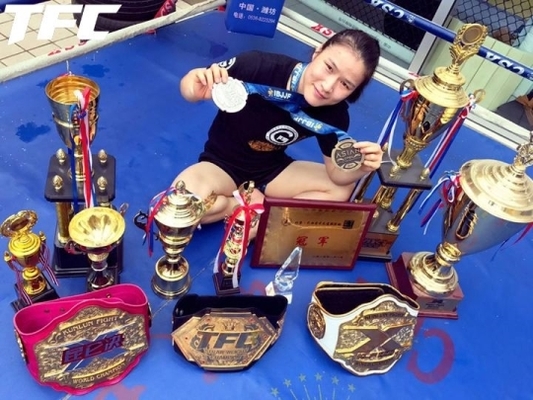 Fighting for a major organization has made Weili Zhang ineligible for regional rankings.

Zhang Weili (born August 13, 1989), nicknamed "Magnum", is a Chinese mixed martial artist. She was the former Kunlun Fight (KLF) strawweight champion and currently competes in the strawweight division of the Ultimate Fighting Championship (UFC), where she was the former UFC Women's Strawweight Champion. She was the first ever Chinese and East Asian champion in UFC history. As of July 29th, 2021, she is ranked #4 in UFC women's pound-for-pound rankings.

Zhang was born in Handan, Hebei, China. When she moved to Beijing, she had several jobs: worked as a cashier in a supermarket, worked in a kindergarten and at a hotel, as well. She started training martial arts at a young age beginning with Shaolin Kung Fu being inspired by Kung Fu films, then would later start training in Sanda when she was 12, and Chinese wrestling called Shuai Jiao. Later in her career she would also pick up Brazilian jiu-jitsu (BJJ) after watching others grappling in the gym where she worked as a fitness instructor. She then transitioned to MMA. In a Chinese television show in December 2019, she mentioned that Hong Kong Action Superstar Donnie Yen was her inspiration to compete in MMA, and that Donnie Yen's 2007 feature film Flashpoint was her first introduction to the sport of MMA.

Following her win over Torres, Zhang would be granted a title shot against the newly crowned champion Jéssica Andrade for the UFC Women's Strawweight Championship on August 31, 2019, in the main-event of UFC on ESPN+ 15. Zhang would get into the pocket with Andrade before stopping the champion with brutal knees. She won the fight via technical knockout just over 40 seconds into the first round to become the new Strawweight champion. The win also earned Zhang her first Performance of the Night bonus award.

In the first defense of her title, Zhang was scheduled to face former UFC Strawweight champion Joanna Jędrzejczyk on March 7, 2020 at UFC 248. Zhang moved her training camp from China to Thailand and later moved to Dubai due to the COVID-19 pandemic, as TSA rules stated a two-week quarantine was imposed for any non-US citizen be granted entry to the United States if they had recently been in China. After multiple failed attempts to obtain a US visa to fight in UFC's events in the US, on February 19, 2020 Zhang was granted US visa to fight at UFC 248. Zhang and Joanna would deliver one of the most violent fights in the history of the sport, Zhang would edge out a split decision win, which marked her first successful UFC Strawweight title defense. This win also marked her first Fight of the Night award. The fight was given the fight of the year 2020 award by multiple outlets including MMAFighting.com. Due to the damage they took, both fighters were later handed a two-month medical suspension which expired on May 5 2020, with a non-contact sparring clause until April 22, 2020.

Following her first succesful title defense, Zhang would return over a year later to defend her belt against the former UFC Strawweight champion, Rose Namajunas in the co-main event of UFC 261. The lead up to the fight would be intense as this marked the first event with crowds back in the building after the Covid pandemic. Zhang would be constantly booed by the crowds leading up to the fight. Rose Namajunas would land a picture perfect headkick on Weili, just over a minute into the first round. This kick would knock the reigning champion out, handing her, her first loss since her debut against Meng Bo. Zhang would later claim that the constant booing from the crowd put her off her game but would still show respect to Rose who was now a two time Strawweight champion.

Whatever is next for Zhang remains to be seen, will she get her rematch with Rose or will she have to fight her way back up? Whatever comes next for the former Champion, one thing is for certain, the whole world will be watching.