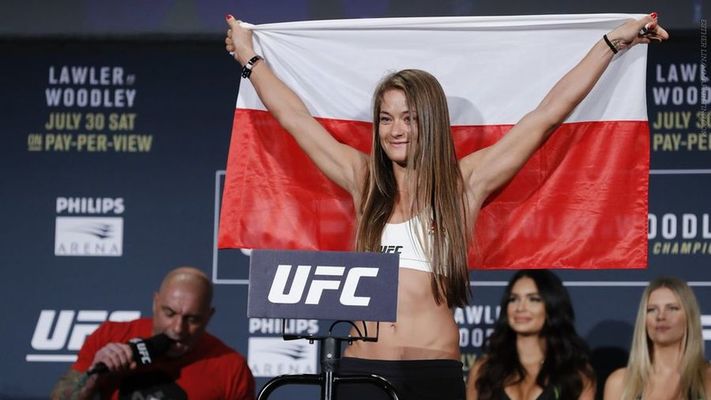 Fighting for a major organization has made Karolina Kowalkiewicz ineligible for regional rankings.

Kowalkiewicz began training Krav Maga at the age of 16 to learn how to protect herself. In a few years, she was working as a Krav Maga instructor, but soon after transitioned to MMA training. With her coach’s assurance, Kowalkiewicz began fighting amateur Muay Thai and even managed to win the Polish Cup (amateur national championship). Following a brief amateur MMA career, which included a submission loss to Jędrzejczyk via rear naked choke, she made her professional MMA debut in May 2012 with a first round TKO of fellow debutant Marzena Wojas.

In just her second professional bout, Kowalkiewicz was entered into a four-woman tournament to crown the inaugural KSW Women’s Flyweight (121 lbs.) champion. In the semifinals, she beat Jędrzejczyk’s teammate Paulina Bońkowska by unanimous decision in what was KSW 21’s Fight of the Night. In the finals at KSW 23, she submitted Marta Chojnoska with a rear naked choke in 71 seconds to win the belt.

With her title now rebranded the KSW Women’s Strawweight Championship (115 lbs.), Kowalkiewicz proceeded into a scheduled bout with Invicta FC veteran Jasminka Cive. However, Cive fainted and sustained a concussion a few days before their fight, forcing her withdrawal. Thus, the match became a non-title catchweight affair at 119 lbs. against another Invicta FC veteran in Simona Soukupova. Kowalkiewicz would win by unanimous decision and go on to defend her title against Cive at KSW 27, winning Submission of the Night honors for her first-round armbar finish.

Kowalkiewicz’s next fight pitted her against 20-year-old DEEP JEWELS champion Mizuki Inoue in the co-main event of Invicta FC 9; her first bout outside of her native Poland. Despite having her back taken in round two and engaging in multiple wild striking exchanges with Inoue, Kowalkiewicz won via split decision on the strength of her high-volume punching combinations and control of distance. The match was awarded Fight of the Night honors and garnered acclaim from fans of WMMA. After one last Fight of the Night performance in KSW against former WSOF title challenger Kalindra Faria (won by split decision), Kowalkiewicz signed with the UFC in September 2015.

Kowalkiewicz's UFC debut came against TUF 20 semifinalist Randa Markos on the main card of UFC on FOX 17. Similar to the Inoue fight, Kowalkiewicz had her back taken for a large portion of round two, but she came back to batter Markos on the feet and nearly finish her with strikes from mount in round three to secure the unanimous decision victory. She followed it up with another unanimous decision over a TUF 20 cast member; beating Heather Jo Clark in Rotterdam, The Netherlands.

Suddenly a factor in the Women's Strawweight division, Kowalkiewicz was slated for a number one contender's match with TUF 20 runner-up and former title challenger Rose Namajunas in the co-main event of UFC 201. In that fight, Kowalkiewicz weathered a tough first round and utilized improved offense in the Thai clinch to take a split decision; capturing Fight of the Night honors in the process. The win earned her an immediate title shot against undefeated champion and rival Jędrzejczyk.

Taking place at UFC 205, the promotion's monumental first event in Madison Square Garden, the second meeting between Kowalkiewicz and Jędrzejczyk proved to be a spirited one. Even though she was soundly outstruck for the majority of the fight, Kowalkiewicz wobbled the champion with a right hand in the fourth round and managed to walk through much of her opponent's offense en route to the unanimous decision loss. All three judges scored the contest 49-46 in favor of Jędrzejczyk. The loss was the first of Kowalkiewicz's professional career.

Kowalkiewicz trains with the SHARK Top Team in Łódź, Poland, which includes UFC veterans Paweł Pawlak and Marcin Wrzosek. She is noted for her tremendous composure during fights, characterized by her standing with her hands behind her back prior to the start of each round or winking at the camera. Her regular entrance music is Iggy Pop's "The Passenger."

Before settling on MMA as a career, she studied journalism, archaeology and sport pedagogy at different intervals in college, though she never graduated. She even finished schooling to become a movie stuntwoman. Kowalkiewicz has won post-fight bonuses in five of her 11 bouts, and has appeared on the main card in all of them.