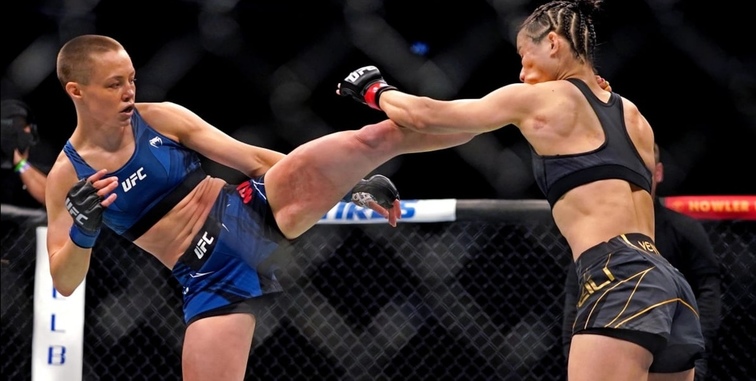 Fighting for a major organization has made Rose Namajunas ineligible for regional rankings.

Rose began her MMA career in 2010 going May 11th 2019 at UFCefeated at 4-0 with two first-round knockouts and two decisions. She is also engaged to former UFC heavyweight and K1 competitor, Pat Barry.

She made her pro debut in 2013 at Invicta FC 4. She defeated Emily  decision. Kagan via third round submission (RNC) which earned her submission of the night. In her sophomore effort at Invicta FC 5, she pulled off a flying arm bar on Kathina Catron just 12 seconds into the bout. She was awarded another submission of the night bonus. Namajunas suffered her first pro defeat at the hands of Tecia Torres at Invicta FC 6 via decision. Following the loss she would be invited along with several other straw weights from Invicta FC's roster to compete in season 20 of the Ultimate Fighter to crown the first UFC strawweight champion.

Namajunas was expected to face Nina Ansaroff, at UFC 187, however Ansaroff team and doctor's would not allow Ansaroff to fight due to her dealing with a flu-like illness.

Rose's next fight was against Angela Hill at UFC 192 she won the fight by rear naked choke in round one.

She next faced Paige Vanzant on UFC fight night 80 she defeated Vanzant by rear naked choke in round five.

Her next fight was a rematch against Tecia Torres at UFC on fox 19 she won the fight by unanimous decision avenging her previous loss to Torres. On UFC on fox 21 Thug Rose faced off against Karolina Kowalkiewicz at UFC 201 and lost the close fight by split decision.

Her next fight was on UFC on fox 24 against Michelle Waterson. She won the fight by rear naked choke in round two.

This win earned rose a shot at the strawweight champion Joanna Jedrzejczyk. The title fight took place at UFC 217. Rose came out strong and won the fight by knock out in the first round. In interviews in the week following the fight Joanna stated that a bad weight cut on her part was the only reason Rose beat her. It was the first loss of Joanna's career. On April 7th 2018 the two fighters had a rematch at UFC 223 and Rose Namajunas defeated Joanna again In a unanimous decision succesfully defending her belt for the first time.

Her next title defense is scheduled for may 11th 2019 at UFC 237 against Jessica Andrade. Despite dominating the first round and most of the second Namajunas was then slammed on her head and Tko with punches. It was the first time Namajunas fought outside the USA. A rematch has since been booked but was cancelled by Namajunas after a couple of deaths in her family due to the covid-19 virus.