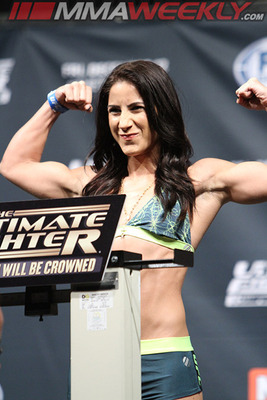 Fighting for a major organization has made Tecia Torres ineligible for regional rankings.

Torres is a black belt in karate.

A black belt in jhoon-rhee-taekwondo.

And a blue belt in Brazilian jujitsu.

She won UFC performance of the night one time.

Before turning pro, Torres went undefeated as an amateur fighting obtaining a record of 7-0. 2 of those 7 victories came by way of stoppage, 1 by way of submission and the other by way of TKO. Aside from competing in mixed martial arts, Torres also has competed in pro kickboxing where she also has an undefeated record of 1-0.

Since turning into a pro fighter, Torres made her debut and stayed fighting in the all female Invicta Fighting Championships organization where she has unanimous decision victories over the likes of Kaiyana Rain, Paige VanZant, Rose Namajunas and Felice Herrig. Torres next joined the cast of the ultimate fighter season 20.

* Justine Kish was unable to fight Due to  Injury . Torres was named as her replacement.

Following the show, Torres was set to face Angela magana at the ultimate fighter season 20 finale.

Torres dominated the fight out striking Magana two to one on way to a unanimous decision.

On June 13th 2015 Torres faced Angela Hill at UFC 188 and won the fight by unanimous decision.

She next faced off with newcomer Jocelyn Jones Lybarger and won the fight by unanimous decision.

On April 16th 2016 UFC on fox 19 Torres had a rematch with Rose Namajunas.  She lost the fight by unanimous decision.

On February 4th 2017 Torres had a rematch with Bec Rawlings. The fight went off at a catch weight due to Rawlings missing weight.

On July 7th 2017 at the ultimate fighter season 25 finale Torres faced Juliana Lima and won the fight by sub in round two.

This was the first performance of the night award win for Torres.

On December 2nd 2017 Torres faced the karate hottie Michelle Waterson at UFC 218. She won the fight by unanimous decision.

Torres next faced Jessica Andrade on February 24th 2018 at UFC on fox 28. She lost the fight by unanimous decision.

On July 28th 2018 Torres faced former strawweight champion Joanna Jedrzejczyk on UFC on fox 30 and lost the fight by unanimous decision this also marked the first time that Torres has lost two in a row.

Tecia got in a 4 fights skid after losing to Marina Rodriguez via Unanimous at the UFC on ESPN+ 14.
Her following fight against Mizuki Inoue couldn't take place as the UFC Event on ESPN 8 was cancelled due to Coronavirus.