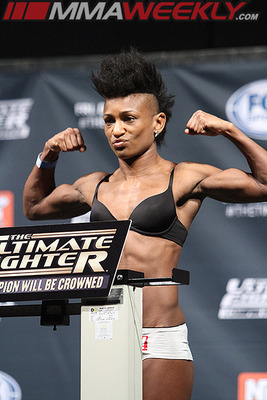 Fighting for a major organization has made Angela Hill ineligible for regional rankings.

Angela Patrice Hill is an American mixed martial artist who competes in the strawweight division. She was formerly signed with the Invicta Fighting Championships, of which she was the strawweight champion. She is also a former World Kickboxing Association champion.

Angela Hill began her pro MMA career in 2014 defeating Stephanie Skinner. A few months later she was selected from the open-tryouts for the 20th season of the Ultimate Fighter to crown the inaugural UFC straw weight champion. She is the least experienced fighter to be selected for the series at 1-0 since Matt Mitrione on season 10 (0-0).