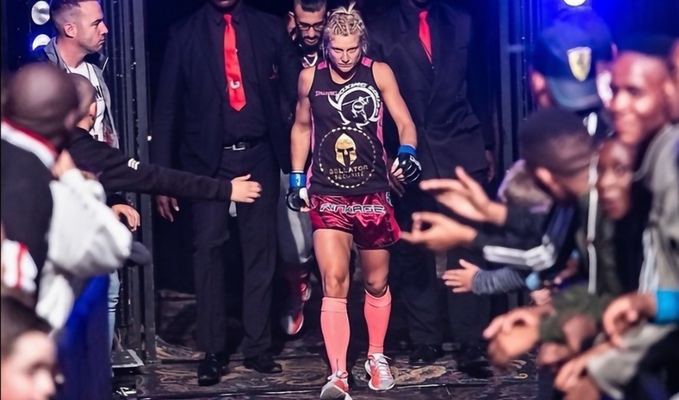 Fighting for a major organization has made Manon Fiorot ineligible for regional rankings.

Manon Caroline Fiorot was born in Nice, France. She began training Karate at the age of seven before taking a break from martial arts to try her hand at competitive snowboarding and winning the French Snowboarding Championship. As a child, Fiorot attended many wreslling tournaments that her father competed in and loved martial arts films. Fiorot returned to Karate at eighteen and earned a black belt in that discipline. She would would win a Division 2 Karate National Championship and a third place finish in the first division to earn a spot on the French national Karate team. Fiorot was set to compete in the 2014 World Karate Championship before she was forced out due to injury. She would bounce by winning three K-1 national championship titles. Fiorot also took up Muay Thai during this time and has a 12-0 amateur Muay Thai record.

Fiorot began training mixed martial arts after fellow karate practitioners introduced her to the sport. Fiorot was particularly inspired by the success of Lyoto Machida. Less than a after she started training, Fiorot competed in her first amateur bout at the 2016 IMMAF World Championships. She lost to Camilla Manness via second-round rear naked choke. Fiorot entered the European Amateur Championships in 2017, losing to Cornelia Holm in the finals. She bounced back by winning the 2017 IMMAF World Championships later that year.

Fiorot made her professional MMA debut against future Bellator fighter Leah McCourt on June 16, 2018 at Cage Warriors 94: Bouland vs. Topuria. The fight was contested at a Catchweight of 138 lbs. The fight was a back-and-forth contest with Fiorot's kickboxing and power giving her the edge in the standup and McCourt's Judo gaving her the edge against the cage and on the mat. The fight ended as a split decision, with David Lethaby scoring the fight 30-27 McCourt, Ben Cartlidge scoring it 30-27 Fiorot, and Mark Collett scoring in 29-28 McCourt. Fiorot would move down to Flyweight and travel to South Africa to compete in Extreme Fighting Championship. She went 2-0 in the promotion and won the EFC Worldwide Flyweight Championship by defeating Amanda Lino via unanimous decision (EFC 83). Fiorot then went 3-0 in UAE Warriors, defeating all of her opponents via TKO and capturing the UAEW Flyweight Championship (UAE Warriors 14).

Fiorot made her UFC debut on Janaury 20, 2021 against Victoria Leonardo at UFC on ESPN: Chiesa vs. Magny. Fiorot stormed through Leonardo and won via second-round TKO. Fiorot was scheduled to face Maryna Moroz at UFC Fight Night: Rozenstruik vs. Sakai, but Mrooz had to pull out and was replaced on short notice by Tabatha Ricci. Fiorot defeated Ricci via second-round TKO. Fiorot has won her three most recent fights by unanimous decision, defeating Mayra Bueno Silva (UFC Fight Night: Ladd vs. Dumont) in 2021 and defating UFC Flyweight veterans Jennifer Maia (UFC on ESPN: Blaydes vs. Daukaus) and Katlyn Chookagian (UFC 280) in 2022.