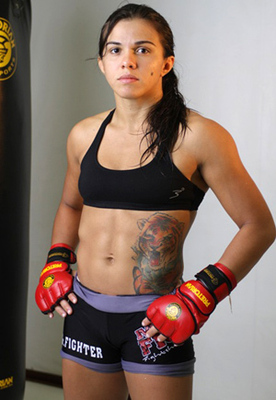 Cláudia Gadelha is ineligible for regional rankings due to inactivity.
Fighters must have at least one completed MMA bout in the past two years to be ranked.

Claudia Gedelha is a female Brazillian MMA fighter who trains at the world famous Nova Uniao where Jose Aldo andRenan Barao train at. She is the youngest black belt in jiu jitsu at Nova Uniao receiving her belt from Andre Pederneiras. She is allso a 3 time World Champion at BJJ in the brown belt division.

Claudia would go 10-0 before signing with Invicta and picking up a win over another undefeated fighter Ayaka Hamasaki. After that victory she would sign with the UFC. She would pick up a decision win over Tina Lähdemäki in her UFC debut but would drop a Split Decision to Joanna Jędrzejczyk in her next fight.

Ana Cláudia Dantas Gadelha is a Brazilian mixed martial artist who currently competes in the Women's Strawweight division of the Ultimate Fighting Championship. As of May 19, 2020, she is #6 in the UFC women's strawweight rankings and #13 in UFC women's pound-for-pound rankings.