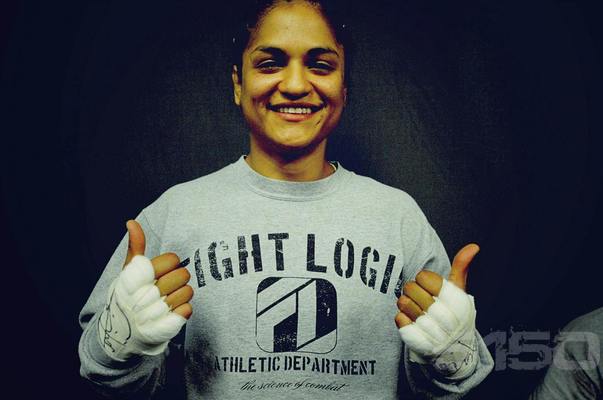 Fighting for a major organization has made Cynthia Calvillo ineligible for regional rankings.

Cynthia Tafoya Calvillo (born July 13, 1987) is a Mexican-American mixed martial artist who competes in the strawweight and flyweight divisions of the Ultimate Fighting Championship. As of June 30, 2020, she is #2 in the UFC women's flyweight rankings and #13 in UFC women's pound-for-pound rankings. Calvillo made her amateur debut in 2012, and garnered a 5–1 record over four years. In her UFC debut, Calvillo accepted a ten-day notice fight against Amanda Cooper at UFC 209 on March 4, 2017. She defeated Cooper by submission in the first round. Following her successful UFC debut, she was asked to join the main card of UFC 210 against promotional newcomer Pearl Gonzalez. Gonzalez was ruled out of the contest after the NYSAC said she could not fight because of her breast implants, which are banned among combat-sports competitors. Later the decision was reversed and the fight was allowed to go on as scheduled. Calvillo won the fight by third round rear-naked choke submission. Calvillo faced Joanne Calderwood in a strawweight bout on July 16, 2017, at UFC Fight Night 113. At the weigh-ins, Calderwood came in at 118 pounds, two pounds over the strawweight limit of 116 lbs. As a result, she was fined 20% of her purse, which went to Calvillo and their bout proceeded as scheduled at a catchweight fight. Calvillo won the fight via unanimous decision. Calvillo faced Carla Esparza on December 30, 2017, at UFC 219. She lost the fight by unanimous decision, with all three judges scoring the bout 29-28 for Esparza. After the fight, it was revealed that Calvillo had failed an in-competition drug test for marijuana metabolites. As a result, she was suspended by USADA for 6 months with the ability to reduce the suspension to 3 months by completing a USADA approved drug awareness program. The Nevada Athletic Commission later extended this to 9 months. Calvillo faced Poliana Botelho on November 17, 2018, at UFC Fight Night 140. At the weigh-ins, Calvillo weighed in at 118 pounds, 2 pounds over the strawweight non-title fight limit of 116 pounds. She was fined 20 percent of her purse, which went to her opponent, Botelho, and the bout proceeded at catchweight. She won the fight via a rear-naked choke in round one. Calvillo next faced Cortney Casey on February 17, 2019, at UFC on ESPN 1. She won the fight by unanimous decision. Calvillo was scheduled to face Lívia Renata Souza on July 13, 2019, at UFC on ESPN+ 13. However, on June 7, 2019 it was reported that Calvillo was forced to pull out of the bout due to a broken foot and she was replaced by Brianna van Buren. Calvillo was scheduled to face Cláudia Gadelha on December 7, 2019, at UFC on ESPN 7. However, on October 22, 2019, it was announced that Gadelha was forced to withdraw from the bout due to broken finger and torn ligament, and she was replaced by Marina Rodriguez. After three rounds of fighting, the bout ended with a majority draw.  Calvillo was scheduled to face Antonina Shevchenko on April 25, 2020. However, on April 9, Dana White, the president of UFC announced that this event was postponed to a future date. Instead Calvillo faced Jessica Eye on June 13, 2020 in the main event at UFC on ESPN: Eye vs. Calvillo. At the weigh-ins on June 12, Eye missed weight, weighing in at 126.25 pounds, a quarter pound over the non-title flyweight limit of 126 pounds. The bout proceeded as a catchweight bout and Eye was fined 25% of her purse. Calvillo won the fight via unanimous decision.