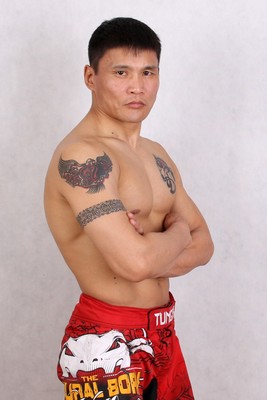 Narantungalag Jadambaa is ineligible for regional rankings due to inactivity.
Fighters must have at least one completed MMA bout in the past two years to be ranked.

Jadamba is a Lightweight fighting for Legend FC. He holds a black belt in Kyokushin, a purple belt in Brazilian Jiu Jitsu, and a 2nd dan black belt in Judo. In addition to Legacy, Jadamba has fought in Sengoku and K-1. He holds notable victories over Akihiro Gono, Kazunori Yokota, Adrian Pang, and Nam Yui Chul.

After starting his career 0-2 including a loss to Japanese stand out Kid Yamamoto, he would win his next 2 fights and enter the 2010 MGL Mongolian MMA Championship Tournament. Jadamba won the tournament with back to back 1st round submissions. He then signed to the Sengoku promotion. He defeated Japanese legend Akihiro Gono and Kazunori Yokota.

After Sengoku folded Jadamba signed on to fight for Legend FC's Lightweight title. He defeated Adrian Pang by decision to claim the title. He then defended his title against Nam Yui Chul, winning via 2nd round submission. He next tried to defend his title against Koji Ando. Jadamba would lose by TKO in the 3rd round due to an ankle injury he sustained when sprawling on a takedown.

Following his injury induced loss against Ando, Jadamba would return after a year long absence to battle Honorio Banario at ONE FC 16 - Honor and Glory. Jadamba would would win a unanimous decision verdict after three rounds.

Jadamba would then win his second straight fight at ONE FC 19 - Reign of Champions on August 29, 2014, defeating Koji Oishi bu unanimous decision.

Jadamba also holds a 4-6 record in kickboxing, having fought the likes of Masato and Albert Kraus.