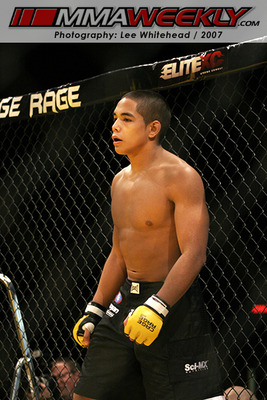 Ronnie Mann is ineligible for regional rankings due to inactivity.
Fighters must have at least one completed MMA bout in the past two years to be ranked.

Mann is a Featherweight and Bantamweight fighter with a background in Muay Thai and a brown belt in Brazilian Jiu Jitsu. He has fought in Cage Rage, Sengoku, Shark Fights, and Bellator. He holds notable victories over Tetsuya Yamada, Shigeki Osawa and Adam Schindler.

Mann took part in Sengoku's Featherweight Grand Prix in 2009. Mann defeated Tetsuya Yamada in the opening round but lost in the quarterfinals by submission to Hatsu Hioki. Mann fought one more time in Sengoku, defeating Shigeki Osawa by decision.

Mann entered Bellator's 2011 Summer Series Featherweight tournament. He defeated Adam Schindler by 1st round KO in the opening round. He lost to eventual tournament and Featherweight champion Pat Curran in the semifinals by decision. In his next Bellator fight he defeated Kenny Foster by 1st round submission. That win qualified Mann for the Season 6 Featherweight tournament where he lost a decision in the opening round to Mike Corey. He dropped Corey twice but was outwrestled for the majority of the fight.

Mann is expected to drop to Bantamweight to fight Rodrigo Lima at Bellator 94.