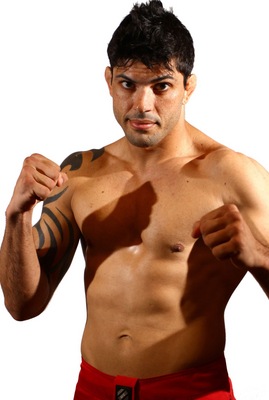 Viscardi Andrade was a competitor on The Ultimate Fighter: Brazil 2.  In the preliminary fights to get into the house, Andrade defeated Thiago "Jambo" Gonçalves by majority decision after two rounds.  Andrade was the fourth pick of Fabrício Werdum, and fought the third elimination round bout in a rematch against Gonçalves.  Following an injury to Team Nogueira's Neilson Gomes, Gonçalves was brought back into the competition due to his contentious decision with Andrade.  However, the rematch ended differently in that Andrade was able to score a first round TKO finish.  In the quarterfinals, Andrade faced yet another replacement fighter in David Vieira, winning the bout via unanimous decision.  However, Andrade's tournament run would end in the semifinals, as William "Patolino" defeated him in the sudden victory round via TKO.

Andrade made his UFC debut two months after the TUF Brazil 2 finale, making quick work of fellow TUF veteran Bristol Marunde and scoring the TKO finish in under two minutes.  His following octagon bout was against Nico Musoke at UFC Fight Night: Machida vs. Mousasi, which he lost via unanimous decision.

Episode 12 William Macário def. Andrade by TKO (punches) in Round 3