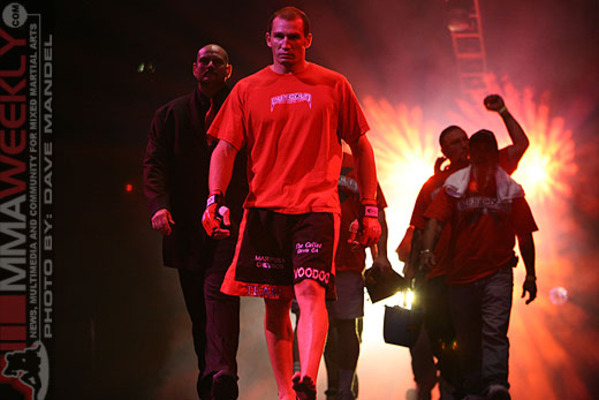 Anthony Ruiz is ineligible for regional rankings due to inactivity.
Fighters must have at least one completed MMA bout in the past two years to be ranked.

A veteran of over 50 professional fights, Ruiz is a true California MMA journeyman - having fought throughout the state, both North and South since 2003, and across multiple weight divisions. He has competed in West Coast staple promotions such as 'Strikeforce', 'King Of The Cage', 'EliteXC', 'WEC', 'Tachi Palace Fights','Gladiator Challenge', and more recently 'Bellator'. He has also competed as far away as Abu Dhabi and Russia.


With a fan friendly style, he has finished many of his opponents via ko/tko stoppage, and is renowned for his ability to absorb a tremendous beating, in victory or defeat.

At 'Strikeforce 4', he achieved an impressive stoppage victory over then 'Strikeforce' middleweight champion Bobby Southworth, in a non-title bout. Staving off Bobby's grappling, he punished him with strikes eventually sending Bobby reeling across the cage at one point, before the bout was called off. When they rematched for the title however, Ruiz lost to Southworth via decision.


In arguably his most famous contest, he travelled to Russia where he faced Russian MMA trailblazer Alexander Shlemenko. Throughout the fight Ruiz was rocked and knocked down on several occasions, suffering a badly broken nose early on.
Regardless of this injury he fought on, taking Shlemenko to a decision, much to the apprecation of the Russian crowd.
Both fighters received a standing ovation from the audience for their efforts, including Russian president and combat sport enthusiast Vladimir Putin, who watched ringside.

After the fight, the president congratulated both fighters, and advised Ruiz in english - "You need to fix your nose.." Despite ongoing post-fight commotions in the ring, Ruiz immediatly wedged his nose betweeen his hands rearranging it from its punched crooked state, back into a straight fixed position, until he got to the hospital for further recovery.


Upon arrivial back in California, he received a phone call from Russia where he was asked by an english-translator how his flight went, how his health was, and what his 'SWIFT-code' bank details were. After hanging up he visited his bank to enquire about his account, wondering what the deal was.

2 days later he received 50,000 into his account via the Russian Federation government. The next day another 50,000 was transferred, and once again another 50,000 was sent for a third day, equating to a 150,000 donation. With Ruiz and his family both ecstatic and alarmed, he realised Putin was so impressed with his performance, that he sent a life changing bonus.
Ruiz would return to Russia, earning a decision victory over Ramazan Mukailov in the Yuzhno Sakhailinsk "Crystal Ice Palace" venue and again in Sochi, losing a hard fought contest to the powerful Alexey Butorin.