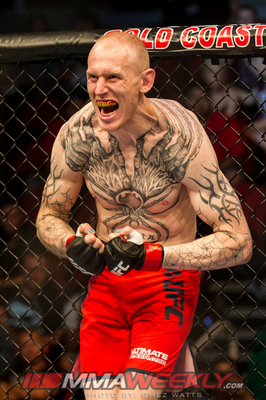 Colin Fletcher is ineligible for regional rankings due to inactivity.
Fighters must have at least one completed MMA bout in the past two years to be ranked.

Colin Fletcher, also known as "The Freakshow" a nickname he earned by dressing up as a clown for fight entrances, began MMA in 2007. Fletcher has held the Strike And Submit Welterweight title as well as the Total Combat European League Lightweight title. Colin fought twice for the BAMMA promotion winning both fights before signing on for The Ultimate Fighter: Smashes.

Fletcher would win his first fight before losing in the finals to Norman Parke. He still managed to impress the UFC enough to earn him a contract and he is now set to face off against another TUF alum in Mike Ricci at UFC 158. In the battle of the TUF Finale losers Fletcher would fall short losing a Unanimous Decision to Ricci. Following the loss it was announced in the beginning of April that Fletcher was cut from the promotion.

Episode 12 Fletcher def. Richie Vaculik by (Submission (Injury Elbow) at 1:27 of Round 2

He started his career has an amateur, fighting in the Middleweight division for MMA Total Combat, compiling an 1-2 record. His first pro fight was also at Middleweight.