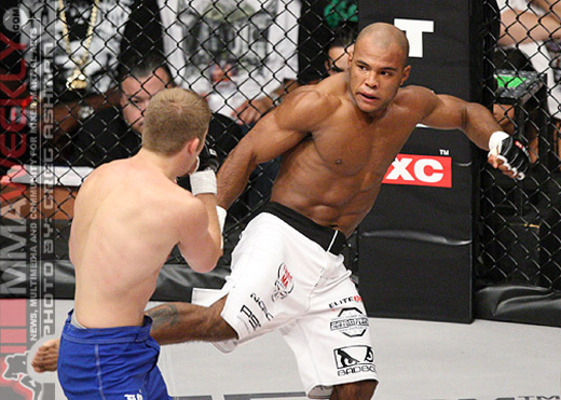 Aside from his extensive grappling credentials, Brazilian Jiu Jitsu ace Wilson Reis has compiled wins over fighters such as Zach Makovsky, Bryan Caraway, and Henry Martinez. Reis started his pro MMA career by winning his first seven bouts, including a fight against Abel Cullum that saw him become the first (and only) Elite XC bantamweight champion. After his success in Elite XC, Reis would move on to fight in Bellator, and would take part in the organization's first featherweight tournament. After defeating future UFC fighter Henry Martinez, Reis would suffer his first pro setback, losing a decision to Joe Soto, who would go on to win the tournament. He would participate in the Season Two featherweight tournament, but would again fall in the semifinal, this time to Patricio 'Pitbull' Freire.

After defeating Deividas Taurosevicius by decision in a non-tournament bout, Reis would once again take part in a Bellator featherweight tournament, this time in the organization's fourth season. He would submit Zac George in the opening round, and would face off against Freire for the second time in his career. This time, Reis would be finished for the first time in his career, as he was knocked out by a vicious flurry of punches, courtesy of Freire, in the third round. In Bellator's fifth season, Reis would attempt to make a run at the bantamweight title, but would get knocked out in the second round by the dynamic Eduardo Dantas, who would go on to win the tournament, and even take the title away from Zach Makovsky.

Reis has won his last two fights in smaller promotions, and does not have a fight lined up as of now. In addition to his success in MMA, Reis is known for winning the 2004 Brazilian Jiu Jitsu World Championships as a brown belt, and also appeared as a coach for Dominick Cruz on 'The Ultimate Fighter: Live.'