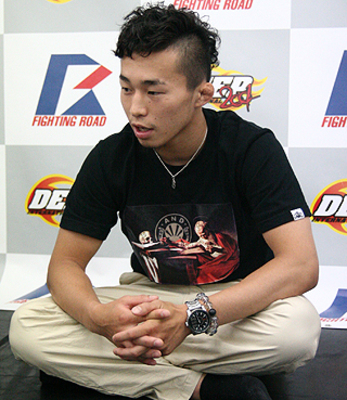 Tatsumitsu Wada is a Japanese fighter born on November 16, 1988 in Kofu, Yamanshi, Japan. Wada’s training in martial arts came at an early age as he began training in karate and then in his high school years he began training judo. He credits Kazushi Sakuraba and Norifumi “KID” Yamamoto as his main MMA inspirations. Wada fights out of and represents the Yoshida Dojo.

In his amateur MMA career, Wada went 2-0 winning both of his amateur fights by submission with a guillotine choke on July 21, 2007.

After the 5 losing streak, Wada turned his career around and evened out his record after a couple of fights including a big 5 win streak with wins over DJ.taiki and Takafumi Otsuka. This win streak earned Wada a DEEP bantamweight title shot against Yoshira Maeda at DEEP 59 IMPACT. Maeda however choked Wada out with a rear naked choke in 2:32 of the second round.

After the loss Wada moved down to flyweight, where he went 1-0-1 in DEEP, earning a shot at then-champion Yuki Motoya. At DEEP 63 IMPACT Wada defeated Motoya via decision to become the DEEP Flyweight Champion.

After losing his title fight, Wada moved down to flyweight.

Wada would win his next fight after losing to Motoya, as he defeated Ryuichi Miki via rear naked choke at Deep - DREAM Impact 2014: Omisoka Special on December 31, 2014. Wada would then win his second fight in a row, beating Gyu Hwa Kim by TKO at Deep - 72 Impact on May 16, 2015.