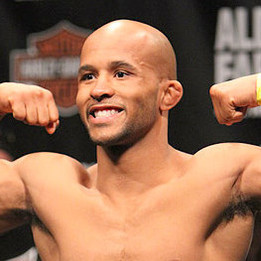 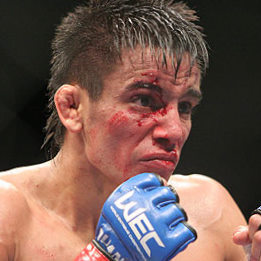 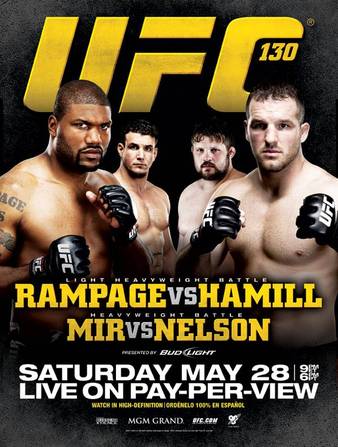 The second UFC 130 bout to air on the Spike TV preliminary card featured Demetrious "Mighty Mouse" Johnson taking on Miguel Angel Torres in a bantamweight contest. Torres, the former WEC bantamweight champion, came into the bout 7-2 in combined WEC and UFC competition. Johnson came in at 3-1 in his prior WEC and UFC fights.

Johnson came out landing low kicks and using his speed to get in and out. Torres clinched up looking for knees but was taken down by Johnson. In a beautiful sweep Torres ended up on top in half-guard, then patiently made his way to side control. Johnson pulled Torres back into full guard after a struggle, but then Johnson made his way back to side control. "Mighty Mouse" swept and almost got top position, but the slick Torres attacked for a leg lock and forced Johnson to get up to his feet and out. Johnson dove back into Torres's guard, but Torres was immediately attacking and in a thrilling set of scrambles the first round came to an end.

Johnson came out and immediately attacked with another low kick. Johnson landed a takedown but Torres wasted no time in threatening with a triangle choke and using that to sweep and force Johnson up to his feet. Johnson took the fight down again, and Torres momentarily worked for an inverted triangle choke, yet not feeling it was close enough let go of the position. Torres worked hard off of his back to sweep or set up submissions, yet it was Johnson who maintained top position for most of the frame.

Johnson threw a big overhand right and came forward to land a takedown. Torres tied up the arms and nearly was in position for an armbar, but Johnson's excellent defense allowed him to escape and stay on top. Torres pulled off another brilliant sweep, ending up in full mount. Johnson got his way back to guard. Torres attacked for a guillotine choke, Johnson escaped, and the intense matchup came to a close.

All three judges scored the bout 29-28 in favor of Demetrious Johnson, in what was certainly the biggest win of his career to that point.

I'm so hot that when I talk on the phone the person on the other line sweats.

In the ashes of the fire victory is born. I'm the man holding a full tank of gas and a lighter.

#fact I can't grow facial hair cause my mother is an anaconda and my father a shark. Nature is a cruel woman with a foot fetish.

Pretty sure sporting an awesome mullet-hawk automatically qualifies you to be in the Hair Club for Men.

People ask me about my politics. My answers are violence & chaos, isn't that what has run the USA for hundreds of years?

Sometimes the ones who try the hardest get the least. Timing is a mother.

The purest type of pheromone comes from Miguel Torres' perspiration. It also tastes like the finest tequila. #fact

I don't know why everyone is hating on steroids, Captain America single handedly stopped the Nazis & he was on Vitamin S. #ohreally

I don't know who are bigger drug pushers, the legal or the illegal dealers. Where there is a demand there will always be a market.

My princess doing work the only way she knows how. http://twitpic.com/55kza6

A mans work is never done.

Up early, time to get back in the gym & stay positive. I'm glad I have the opportunity to do what I do.

Ruling is convenient but only for the rulers.

12 pm in Vegas and all alone, shouldn't have started so early. Always the last man standing, time for the lonely walk to Fat Burger.

Life is funny, sometimes things don't work & sometimes they do. When life gives you lemons, make lemonade. I love that shit.

My thoughts on Memorial Day... http://twitpic.com/54rysd

Heading to Wet Republic, Memorial Day will never be the same after today.

"Dana White says UFC is the NFL of MMA. Does the NFL use NBA refs to referee their games?" @Crotalinae

Thanks to Sherdog, Heavy, Bloody Elbow, & MMAJunkie for scoring the fight in my favor. Bad judging can't hold me down, I will be back.

Rewatched my fight, think I won based on effective attacks, sweeps & position control.

Sorry guys, I fucked up and let the judges decide my fate. Johnson did a good job and had a great game plan.

I have to return some video tapes

Sometimes the ones that seem perfect have the most problems.

I have amazing lats but I live in an ab mans world. #fml

Scientists are working on a Viagra for women, what a waste of time. Its been around for years, its called money. #truth

Why do I have the tags on my aviators still? Cause I'm going to return them after my trip. #ghetto #fabulous http://twitpic.com/51zqjy

Heading to Mandalay Bay for @MMAJunkieLive to be there 1st guest on there 1st television show. Theys all grown up. @mmajunkieradio

Listening to @lilbthebasedgod lyrics remind me of the sound that two kung-fu masters make fighting to the death. #based

Choose the sword & join me, choose the ball & join your mother in death. You do not understand my words but you must choose. #sorry

If sorry meant something the world would be a better place & everyone would be happy. Sorry doesn't change shit.

What do I think about Mayorga's comments? Fuck @therealMayorga, its easy to talk shit when your on the other side of the fence.

Great article up by @EsKmmaHeavy http://soc.li/AsYy6oe sometimes you have to tell it like it is.

All we can wish for in life is to die a noble death.

How fate is smiling on me.

Damn they got me all back of the bus and shit. http://twitpic.com/518oic

Been out of the country for 2 months training for 1 day. In little than a week I will be doing what I was put on this earth to do.

Packing for Vegas. All I bringing is my balls and my heart. #UFC130

Real men don't cry, unless they are in the shower and no one can see them. Then its ok.

Today I will be receiving the blessing of the seven masters in order to depart training & engage my opponent in combat. #ufc130

Attn: All guys leaving for the end of the world fear not, I will take care of your women. #endoftheworldconfessions

My mullet is fierce because it lives by its own law. Its certified in the streets.

#sometimesyouhaveto to kick the tree. Kick the tree or leave my house.

#sometimesyouhaveto make a couple mistakes before you get it right. If the door is closed, break in through the window.

A moment of silence for the #MachoMan Randy Savage, today he passed away. I remember watching him since I was 5. A sad sad day.

Quote of the day: If your vagina is anything like my hand, then we should have no problem. #awesome

The most interesting man in the world. #swag http://twitpic.com/507jmn

#sometimesyouhaveto suffer the consequences or live with the reward. Perception is everything, do or do, not there is no try. #jedi

#sometimesyouhaveto fight for what you believe in, never be afraid to throw the first punch.

#sometimesyouhaveto just grab your nutts and make a power move. I make power moves all day, never shake my hand.

#itshardwhen my balls stick to my leg in a public place and I can't reach in to unstick them. #sometimesyouhaveto take a chance.

#itshardwhen I see bad things happen to good people. If you ain't cheatin you ain't tryin.

#itshardwhen I train in Canada and can't get Mexican food. #sacrifice

They took Tina Turner, they took Michael Jackson, took James Brown, they gave him back. They wont let us have too much fun.

Getting back from the gym, feeling sharp for next week for @ufc. Getting to Vegas Sunday, can't wait to feel the warm sun.

A riddle: What journey be long & twisted & sensitive at hand? To what end must man go to discover the depths of his ecstasy?

They say May 21st the rapture is going down. Ill be in the gym training, gots business to tend to May 28th. Run & tell that.

My ears you ask, in the business we call those keepers.

Help my boy @MattErickson23 get to a thousand followers today, he always puts his ankle in it.