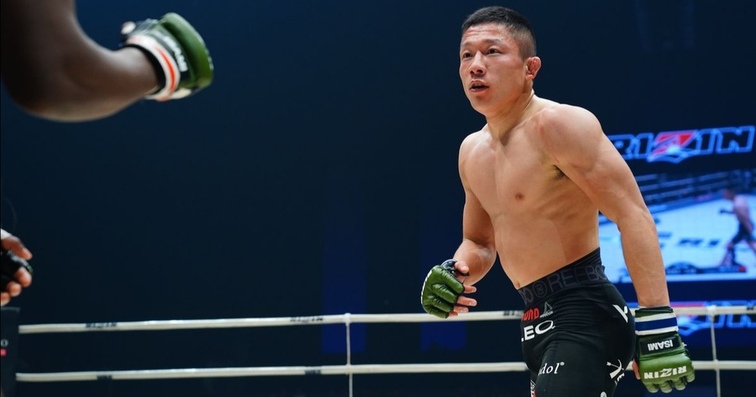 Fighting for a major organization has made Kyoji Horiguchi ineligible for regional rankings.

Horiguchi got an early start in martial arts as his father ran a karate school in which Horiguchi also trained. With a background in karate, Horiguchi began participating in karate tournaments in his high school days. Once Horiguchi graduated, he was picked up by the Krazy Bee team and began his MMA training alongside fighters such as Japanese MMA legend Norifumi "KID" Yamamoto and UFC veteran Issei Tamura.

On December 20, 2009, Horiguchi made his amateur MMA debut. On the same date, Horiguchi participated in the Shooto Amateur Open Tournament East 6th where he successfully competed and won by defeating 4 opponents in the same day.

Horiguchi then went on to make his MMA debut in 2010, winning a decision over Ranki Kawana. Just two fights later he would win the Shooto 2010 Rookie Tournament, finishing Seiji Akao by TKO early in the second round. His biggest victory would come over the 2009 Rookie Tournament runner-up, Yuta Nezu. Horiguchi's knockout power was on display early, knocking out Nezu in the first round. After defeating Naohiro Mizuno, Horiguchi took on the former Shooto Featherweight Champion Masakatsu Ueda on January 8, 2012. Ueda controlled most of the bout with his superior grappling, nearly submitting Horiguchi numerous times, defeating Horiguchi via majority decision.

After winning 3 fights in a row under Shooto, Horiguchi would fight for the Shooto World Featherweight (132 lbs.) Championship against then-champion Hiromasa Ogikubo at Shooto - 2nd Round. Horiguchi would defeat Ogikubo via submission in the second round to claim the title. In his first title defense, Horiguchi defeated Shintaro Ishiwatari via TKO in the fifth round.

Horiguchi's next bout would be against another Ultimate fighter 14 veteran, Louis Gaudinot. The fight is set to take place at UFC 182.