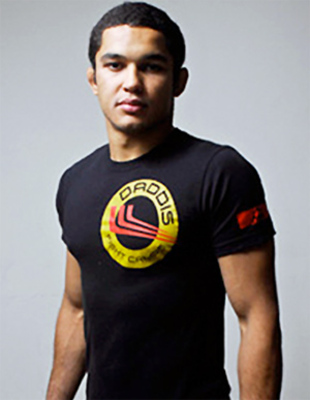 Fighting for a major organization has made Alexandre Bezerra ineligible for regional rankings.

Alexandre Bezerra is a Brazilian featherweight fighter. He holds the rank of brown belt in BJJ under Roberto Godoi and was also a member of the Brazilian national wrestling team. Throughout his career, he has fought for various promotions in Brazil and the US as well as a nine fight stint under the Bellator banner where he went 7-2. Of his seventeen career wins, fifteen haved been finishes including eleven submissions.

Bezerra made his MMA debut in 2008 and garnered an 8-1 record to begin his career with the lone loss coming to current UFC featherweight fighter, Charles "Do Bronx" Oliveira, in what was an evenly contested matchup until the finish. In 2011 he signed with Bellator Fighting Championships and made his debut at Bellator 46 where he would record a first round triangle choke submission over Sam Jones.

Bezerra would go on to win three more fights in Bellator in 2011, finishing all within the first two rounds. This earned him a berth in the Season 6 Featherweight Tournament. His first  tournament matchup came at Bellator 60 against Kenny Foster, where he earned a submission victory by rear naked choke in round number two to advance to the semifinals. In the semifinals, "Popo" would lose a closely contested split decision to veteran and former Sengoku champion, Marlon Sandro.

Alexandre was not invited to participate in the Season 7 Featherweight tournament and had two bouts remaining on his Bellator contract. His next fight was at Bellator 74 against Matt McCook. For the bout, Bezerra switched camps from Daddis FC in Philadelphia to the well renowned Alliance MMA in San Diego California where he trained alongside Bellator Lightweight champion Michael Chandler and UFC lightweight Jeremy Stephens. He would win the fight by first round submission. This win would earn him an invitation to the next featherweight tournament. He would defeat Genair da Silva with another first round submission to move on to the semifinals where he would meet Mike Richman, but would ultimately lose a split decision.

Bezerra would fight outside of Bellator for the first time in three years when he defeated Bruno Dias at Max Sport 13. After a nine month layoff, he would be given a shot at the Cage Fury FC featherweight title against Levan Makashvili at CFFC 38 He would win the belt via majority decision but would lose it in a rematch with Makashvili at CFFC 44.

Vinicius de Jesus is 31 today! Send him a Tweet.