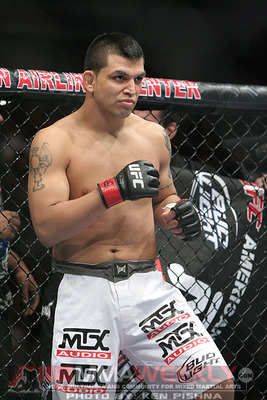 Efrain Escudero is ineligible for regional rankings due to inactivity.
Fighters must have at least one completed MMA bout in the past two years to be ranked.

Efrain Escudero started his career off with a bang in 2006, winning ten straight fights before being invited to compete in the lightweight tournament of The Ultimate Fighter 8 in 2008, which he won by defeating Phillipe Nover in the finals by Unanimous Decision. In his sophomore effort with the promotion, Escudero made a splash in the lightweight division by knocking out Cole Miller in the first round. Known for his tough chin, wrestling ability, and well-rounded skill set, Escudero looked to be a  promising addition to the UFC’s lightweight division. In addition to his mixed martial arts career, Efrain Escudero is also an All-American collegiate wrestler, having placed seventh at the NJCAA national tournament during the 2006-2007 season.

Following the Miller win Escudero would go 1-2 for the UFC with a win over Dan Lauzon but two submission losses to Evan Dunham and Charles Oliveira lead to his release from the promotion. Escudero would continue fighting for other promotions picking up five wins and loss with the only loss being to another former UFC fighter Fabricio Camoes. The run would get Escudero another shot at the UFC however he would struggle once again dropping two straight decisions to Jacob Volkmann and Mac Danzig leading to his release again.

Again Escudero would continue fighting losing his next two to former UFC fighters Tyson Griffin and Jorge Patino. He would get back in the win column finally with a victory over Marcus Edwards for the Sparta Combat League Lightweight title. He would fight for Bellator and CFA before losing to Dakota Cochrane for RFA. He would bounce back and win another title with a TKO over Juha-Pekka Vainikainen Superior Challenge.

Escudero is now set to get his third shot in the UFC as he has once again signed with them and will face Francisco Trinaldo at UFC Fight Night 51.

Episode 2 Escudero def. Ido Pariente by Rear Naked Choke at 3:37 of Round 1

Episode 4 Escudero def. Shane Nelson by Triangle Choke at 4:32 of Round 2

Episode 12 Escudero def. Junie Browning by D'Arce Choke at 3:26 of Round 2