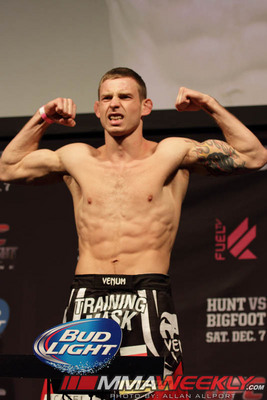 Fighting for a major organization has made Krzysztof Jotko ineligible for regional rankings.

Krzysztof Jotko is a Polish middleweight fighter currently signed to the UFC. He is a brown belt in brazilian jiu jitsu and trains out of Okniński MMA in Orneta, Poland. He claims to have an amateur record of 65-5. He was selected by the Polish MMA portal "Heraklesy" as the 2011 discovery of the year. Of his fourteen career wins, six have been finishes including four T/KOs.

Jotko began his professional career in 2010 with a pair of unanimous decision victories. in 2011, he would win six fights in a four month time span including three wins in one night as part of an eight man tournament. He would take an eight month break from competition before racking up another three wins in two months to start of 2012. He would also win another tournament, this time a four man tilt, as well as a single win to start off 2013.

In late 2013, Krzysztof would be signed to the UFC. He made his promotional debut at UFC Fight Night 33 in Brisbane, Australia against fellow debuter and Bellator veteran, Bruno Santos. Although he was an underdog going into the fight, he would pick up a unanimous decision victory. This was Santos' first loss in his six year professional career.

Jotko didn't fare that well in his second UFC outing when he was caught in a guillotine choke and forced to submit with just one second left in the second round by a Swedish veteran Magnus Cedenblad at UFC Fight Night 41. The loss has been generally attributed in Poland to Jotko's disagreements with his coach, Mirosław Okniński, regarding training, gameplan and even seconds chosen for the fight. After the fight Jotko and Okniński, who has been coaching him since the very beginning of Jotko's career, have parted ways.

Jotko did however bounce back in his next bout by scoring a dominant decision win over another Swedish fighter and TUF alumni, Tor Troéng at UFC Fight Night 53. Despite breaking his left hand early in the second round Jotko managed to defend all 19(!) of Tor's takedown attempts and heavily outstrike him (132 to 26 total strikes landed) over the course of the three rounds even receiving a 30-26 score on one of the judges' cards.