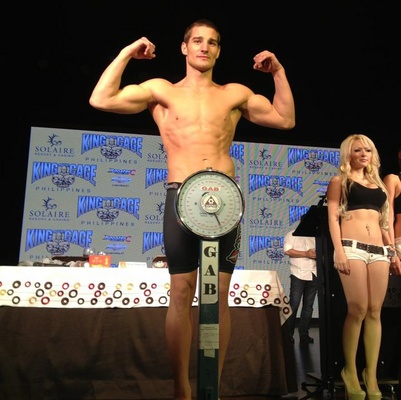 Fighting for a major organization has made Sean Strickland ineligible for regional rankings.

Sean Thomas Strickland is an American mixed martial artist currently competing in the UFC's Middleweight division. As of 8/30/2022 he is the #7 Middleweight in the UFC. He is the former King of the Cage Middleweight Champion.

Strickland was born in New Bern, North Carolina and grew up in Corona, California. Strickland grew up in an abusive household and has struggled with mental health issues and violent impulses for years. As a teenager he was kicked out of school several times and was briefly attracted to neo-Nazi ideology after being introduced to it by his grandfather. Strickland began training MMA at age 14 and has described it as a saving experience, giving him an outlet for his violent desires and an opportunity to assimilate in society.

Strickland would lose two of his nbext four fights, to future champion Kamaru Usman by unanimous deicsion (UFC 210) and to Elizeu Zaleski dos Santos by first round TKO (UFC 224). Two months after his TKO victory over Nordine Taleb (UFC Fight Night: Hall vs. Silva), Strickland was seriosuly injured in a motorcycle accident. After taking nearly  two years off to heal, Strickland returned to Middleweight in 2020 and defeated Jack Marshman by unanimous decision (UFC Fight Night: Hall vs. Silva).

Strickland would keep the win streak going with a TKO victory over Brendan Allen (UFC Fight Night: Felder vs. dos Anjos) and decision victories over Krzysztof Jotko (UFC on ESPN: Reyes vs. Procházka), Uriah Hall (UFC on ESPN: Hall vs. Strickland), and Jack Hermansson (UFC Fight Night: Hermansson vs. Strickland). This earned Strickland a #1 Contender fight against former Glory kickboxer Alex "Poatan" Pereira at UFC 276. Strickland lost via first round TKO. Strickland is scheduled to face Jared Cannonier on October 15, 2022. He currently trains at Xtreme Couture and has been associated with Team Quest and Syndicate MMA.