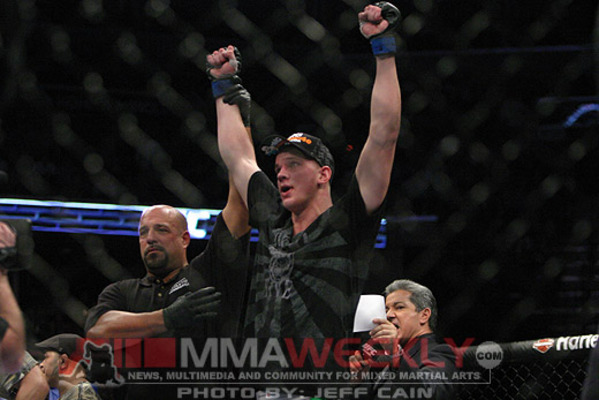 Fighting for a major organization has made Stefan Struve ineligible for regional rankings.

Stefan Struve made his professional MMA debut in 2005 while still a teenager, winning his first bout by Armbar before losing his second by TKO due to injury. Following the loss, Struve put together a ten-fight winning streak before being submitted by Christian M’Pumbu in 2007. Following the second loss of his career, Struve went on a five-fight winning streak en route to his UFC debut against Junior dos Santos, a fight that he lost by TKO in the first round. Although Struve’s UFC career started off shakily, he has since managed to put together several wins, including a Majority Decision over heavyweight veteran Paul Buentello, and is a promising prospect in light of his youth, height (6’11”), and length. Struve sports an excellent submission game and as he matures physically he gets stronger with each passing fight.

Following doubts regarding his status as an elite heavyweight fighter, Struve has embarked on a 4 fight win streak, finishing all of his opponents over the stretch. Due to the nature of these victories, Struve has been referred to as a "hype killer" as his last 3 wins have effectively derailed the momentum of rising heavyweights Dave Herman, Lavar Johnson and previously unbeaten Stipe Miocic. Following his victory over Miocic, Struve has expressed that he believes he is one or two fights away from a title shot and has taken to calling out fellow heavyweight contender Fabricio Werdum. However Struve would stumble on his way to title contention when he was finished by Mark Hunt with a third round TKO at UFC on Fuel TV 8. Struve had his jaw broken in the process. Struve also found out in August of 2013 that he had a heart condition and it was unclear if he would fight again. However in April of 2014 Struve announced that he was cleared to fight again.

After getting officially cleared Struve was scheduled to face Matt Mitrione at UFC 175 in July 2014, the bout however, never happened as on the night of the event Struve collapsed in the dressing room. Due to his elevated heart rate during the accident there was originally a scare it was another sign of his heart condition, but the reason was revealed to be simple hyperventilation / panic attack. Struve was still taken off the card for precautionary reasons and both fighters were paid both the show and win money.

Following his panic attack fight cancellation, Struve was scheduled to face Alistair Overeem at UFC on Fox 13. Overeem would go on to dominate in fight finishing Struve via ground and pound and getting the knockout in the first round.