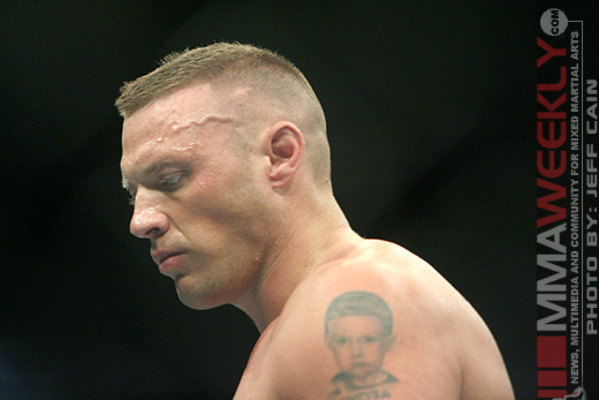 Sean McCorkle is ineligible for regional rankings due to inactivity.
Fighters must have at least one completed MMA bout in the past two years to be ranked.

Sean McCorkle is a heavyweight mixed martial artist who was signed by and debuted for the UFC in September of 2010 against Mark Hunt. McCorkle had amassed a perfect 9-0 record prior to the signing, and was also an avid participant on "The Underground" mixed martial arts forum, where he was known for having a colorful and entertaining personality. Internet support for McCorkle may have had some level of influence in deciding to give the tall Indiana native a shot in the organization.

McCorkle won his debut in impressive fashion, submitting Hunt early in the first round and ensuring more high-profile fights for himself and his legion of online supporters. Unfortunately, he lost his next two fights in the promotion and was promptly released by the UFC.

After his release McCorkle would go on a 6 fight winning streak in smaller promotions at Heavyweight and Super Heavyweight divisions, quickly submitting his opponents before losing a fight to Brian Heden in March 2013, in which he ran out of steam being unable to get the finish in the first round. He would next travel to Australia and Japan, losing to Soa Paleilei and Satoshi Ishii respectively before signing a contract with the Polish based KSW promotion and engaging in a feud with the Polish "World's Strongest Man" turned mixed martial artist Mariusz Pudzianowski.

McCorkle has been able to easily secure a kimura submission victory in his first fight against Pudzianowski, but proved unable to mount any significant offense in the rematch in which he spent most of both rounds on his back ultimately losing a Unanimous Decision to his very tired opponent.

McCorkle followed this loss with another loss almost exactly a year later when he rematched Richard White, a fighter he has previously quickly defeated in March 2012. This time it was McCorkle (who at 334 pounds was the heaviest he's ever fought), who was on the receiving end of a first round defeat as he tapped to an armbar in only about 3 minutes into the fight.