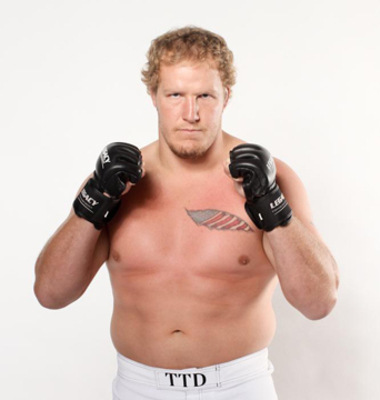 Jared Rosholt is ineligible for regional rankings due to inactivity.
Fighters must have at least one completed MMA bout in the past two years to be ranked.

Jared Rosholt is an American heavyweight fighter currently signed to the UFC. He trains out of Team Takedown in Arlington, Texas.  He is a former collegiate wrestler out of Oklahoma State University. He finished his career with a 125-27 record which made him the winning-est heavyweight wrestler in OSU history. He finish fourth, third and second at the national tournament his final three years of college. He is the younger brother of former WEC and UFC veteran, Jake Rosholt. He has previously fought for Art of War, Titan FC and Legacy FC. Of his nine wins, six have been finishes with equal numbers of T/KOs and submissions although two of his submissions were due to strikes.

Rosholt began his professional career after his collegiate wrestling career was over. He was able to finish his first four fights in four months before he was given a shot at the vacant Legacy FC heavyweight title. Although he was a heavy favorite going into the fight against Derrick Lewis, Jared would be stopped by strikes late in the second round marking his only loss. He would rebound with four more wins in six months including two T/KOs in a combined two minutes and two seconds.

In late 2013, Jared announced that he had been signed by the UFC. He made his debut against fellow newcomer, Walt Harris at The Ultimate Fighter 18 Finale. Although he was visibly dazed early in the fight, he was able to battle back and use his wrestling to secure a unanimous decision win. He would get his second UFC win by decision when he beat Daniel Omielanczuk at UFC Fight Night 39. His next test will come against Soa Palelei at UFC Fight Night 43.